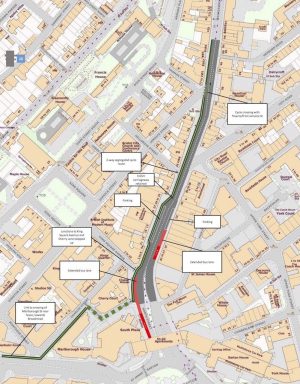 Gloucester Road is popular because it goes where people on bikes want to go; travelling, often commuting, in and out of the City Centre from the populous and vibrant suburbs of North Bristol and South Gloucestershire. The road is direct, and compared to some of the nearby routes (for example, the Concorde Way), it has a much steadier, less steep gradient.

If a road like this, with very poor provision, can show a steady increase in cycling over a sustained period, think what could be achieved if Gloucester Road had protected space for cycling. In London direct, fully segregated cycleways have been built on key commuter routes (suach as the East-West Superhighway) as set out in the Mayor of London’s Cycling Vision. These routes have become extremely busy and near capacity (for example, Vauxhall Cross and Blackfriars Bridge) with cyclists, astonishingly, making up over 50% of all traffic at peak – see Transport for London’s figures. Bristol has some excellent leisure cycling facilities but is lacking in direct, fast commuter routes.

Bristol City Council is right in making cycling a significant part of its transport policy for the future. People are making a big effort to use bicycles, even where it looks and feels hazardous, as on Gloucester Road. We know many people want to cycle but don’t because they perceive it as too dangerous. This is such a commonplace statement one wonders if it needs referencing but here it is in the British Social Attitudes Survey.

So the correct policy is to provide safe, segregated space for bikes in places people want to cycle such as Gloucester Road. This gives the Council an opportunity, and a responsibility, to respond and is in accordance with their Cycle Strategy. Gloucester Road is named as one of the key radial routes.

Some people will say it can’t be done. If you build cycle lanes on Gloucester Road where will the motor traffic go? In fact it is, in the main, a wide road. There is space for a good pavement, a segregated cycle lane and a motor lane both north and south bound in most places. In some parts there is space for a bus lane and/or car parking spaces as well.

What about car parking? There is scope for relocating some car parking places. There are places where there is space for car parking and a segregated cycle lane to exist side by side. Inevitably there are challenging, or narrow, sections to contend with (for example, through Montpelier and around the Arches). Are there alternative or parallel routes which could be considered? One needs to be cautious about that. Unless cycle routes are direct and simple they tend not to get used. Filtered permeability and redirection of through motor traffic (via Muller Road and the M32, for example) should be considered first.

There is already popular support for a Gloucester Road cycle route as shown by this Bristol City Council epetition three years ago. There is also overwhelming local political support. Of the nine Councillors elected last May whose wards Gloucester and/or Cheltenham Roads either pass through or adjoin, eight signed up to Bristol Cycling Campaign’s spaceforcycling ward asks (see Ashley, Bishopston, and  Horfield). These included, for Gloucester Road; “it’s time for the whole carriageway to be properly designed to reflect the multiple uses of this High Street with protected cycleways”

Gloucester Road through Bishopston has famously been described as the last great British high street. That is about people on foot, or on a bike, going to local shops and not about SUVs and three-car-families driving miles to an out of town shopping centre.

Gloucester Road has many independent shops and businesses which need to be helped to flourish. Cycling facilities do that and they produce a better environment for pedestrians, who are very important in this area; witness the experience of the Waltham Forest mini Holland in North East London. Certainly public realm and local shopping enhancements should be part of this proposal.

The protected cycle route needs to continue to the City Centre via Cheltenham Road, Stokes Croft and North Street (the last two being mostly wide and perhaps suitable for a two-way cycle track on the west side ?). Ideally it also should embrace Filton Road and link to the Filton Airfield development in South Gloucestershire which has numerous intended cycle and pedestrian linkages which are a bit meaningless if they don’t go anywhere. It should also be possible to secure funding from the Developer.

So what’s not to like? Bristol City Council, we call on you to consult with us and other, particularly local, interested parties as to the design and implementation of a safe protected cycle route on Gloucester Road to enhance the local environment for all, including those who need to, and will continue to, use motor transport.