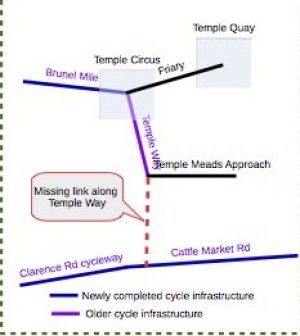 In Aug 2017 we submitted this modest proposal for Temple Way to address the missing link on this important route across the entrance to Temple Meads Station. We don’t feel the provision for walking and cycling on the redesigned Temple Meads / Temple Quarter Enterprise Zone are anywhere near adequate (Temple Greenways consultation).

The short response from the programme manager was “The idea you have put forward was considered in the design process for the Temple Circus scheme but we have chosen alternatives routes to improve for cyclists.”

Works to the Temple Circus gyratory, Temple Gate and Bath Bridges are underway and are due for completion by Autumn 2018. More information on the works, including plans, can be found on the BTQEZ website. Included in the Temple Circus scheme are significant improvements to cycle routes through the area, including, wherever possible, segregated cycle routes on the key desire lines. We have also sought to future proof the scheme as much as possible in terms of supporting and connecting to the redevelopment of Temple Meads Station. As indicated in the Spatial Framework for the Enterprise Zone (also available on the BTQEZ website), there is opportunity for significantly improved and increased cycle parking for the station to be provided on the north side adjacent to an improved northern entrance. This then changes the routes by which cyclists will approach the station.

Temple Way currently carries some 1,700 cycle movements per day between Temple Circus and Station Approach. However, conditions for the large numbers of cycle journeys between Temple Meads and south Bristol are far less satisfactory. Bristol Cycling have identi ed how a modest investment could make a major di erence to all those wishing to cycle to the Temple Meads / Temple Quarter Enterprise Zone area from the south.

A missing piece of key infrastructure

The short distance between the Temple Way – Station Approach junction and Bath Bridges. Currently the area has benefitted from a series of new cycle infrastructure, including:

Despite the large number of cycle journeys on Temple Way, there are currently no continuous cycle facilities linking Temple Meads with Bath Bridges gyratory. Existing conditions are unpleasant, with a six lane dual carriageway separating the western from the eastern sides of Temple Way. On the eastern side, many instances of cyclists on the pavement can be observed, interfering with pedestrians and bus passengers which indicates the perceived danger. Many of these southbound cyclists then face a three or four stage crossing to reach the protected cycleway on Clarence Road – a highly inconvenient arrangement.

A fully segregated cycleway is proposed for this section by taking advantage of the following factors:

The proposal is illustrated on the following diagram: 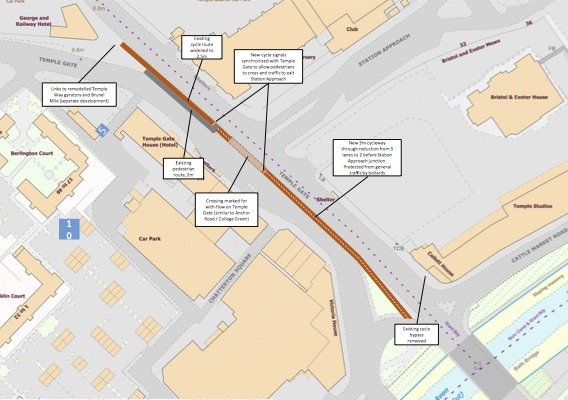 The proposal is entirely consistent with the Temple Quarter Enterprise Zone Sustainable Mobility Plan which notes:

The University of Bristol Temple Quay Masterplan is ideally located to take advantage of this proposal, providing direct access to the site from Cattle Market Road towards the city centre via Victoria Street

The following points illustrate the advantages of the proposal:

The following engineering constraint is noted: