Active travel in the age of Covid: £2bn investment announced 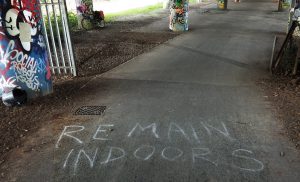 Two unusual words led the Government’s Covid 19 briefing on May 9; walking and cycling.  Why? It wasn’t just because the briefing was given by the Secretary of State for Transport Grant Shapps (though he does like what he calls travelling “under your own steam”) it was because active travel, walking and cycling is at the heart of the Government’s recovery agenda; they say we need to walk and cycle our way out of lockdown.

It’s all about social distancing. When this is implemented on public transport as lockdown eases it will reduce capacity by up to 85%. It’s the equivalent of reducing Marvin Rees’ fleet of 77 new biogas buses to 11. Dramatic. When people can’t use public transport to get to work they take to cars; as life returned to normal in Wuhan, China, congestion levels spiked 30% above last year’s average.

If Bristol followed this pattern it would be disastrous. In an already heavily car-dependent city more motor traffic would cause even higher levels of congestion. The city would grind to a halt, the economic recovery would be slowed and worse still air pollution would intensify. Bad air caused by toxic vehicle emissions already kills 300 people a year prematurely. It would be tragic if that number went up.

We really don’t want that to happen to Bristol and, fortunately neither does the government. So, the announcement of a helping hand for our towns and cities on May 9 deserves big applause. Shapps wants to see the existing road network adapted all over the country with pop-up bike lanes with protected space for cycling, wider pavements, safer junctions, and cycle and bus-only corridors, and changes to support walking and cycling to school (as we’ve already proposed, Let’s have safer streets during Covid-19). These will allow people to switch to active travel easily and stop them jumping in the car only to sit fuming in a traffic jam.

The Department for Transport have created a £250 million emergency active travel fund – the first stage of a £2 billion investment package. They say:

“The government therefore expects local authorities to make significant changes to their road layouts to give more space to cyclists and pedestrians.

“Active travel is affordable, delivers significant health benefits, has been shown to improve wellbeing, mitigates congestion, improves air quality and has no carbon emissions at the point of use. Towns and cities based around active travel will have happier and healthier citizens as well as lasting local economic benefits”

None of this requires new legislation says the Department:

“None of these measures are new – they are interventions that are a standard part of the traffic management toolkit, but a step-change in their roll-out is needed to ensure a green restart.

“Measures should be taken as swiftly as possible, and in any event within weeks, given the urgent need to change travel habits before the restart takes full effect.”

In other words Bristol City Council already has all the powers it needs to make the changes the Government recommends to speed recovery.

Bristol must bid for its share of this money. In the Cycling Campaign we can help. In 2013 we developed the ‘Cycling Tube Map’ which offered a practical plan for a citywide protected Bristol Cycling Network. We recently conducted a detailed analysis of the cycling and walking elements of the Local Cycling and Walking Infrastructure Plan (LCWIP). We know about cycling and we know Bristol. So we are certain Bristol can successfully bid for some of the Secretary of State’s active travel fund.

It sounds like this is all about machines and infrastructure. It isn’t, it’s about people and the places that we live and work in. It’s about the quality-of-life in Bristol, because if people like these temporary changes then we should capture the benefits permanently. Why shouldn’t the clean air we’ve become used to over the past few weeks not become the ‘new normal’? It will help Bristol become a greener City.

The government announcement can be found here: https://www.gov.uk/government/news/2-billion-package-to-create-new-era-for-cycling-and-walking