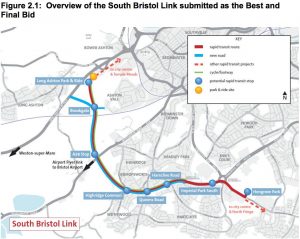 The South Bristol Link Road (SBLR) opened in December 2016. It has a parallel shared use path for pedestrians and cycles which connects at Long Ashton to the Festival Way (National Cycle Network 33). It then links at the other end to the Malago Greenway at Hengrove. There is a spur connecting through the Long Ashton Park & Ride to the maintenance track / cycleway alongside the guided busway between Long Ashton and Temple Meads.

The Metrobus busway will overfly the Temple Meads to Portbury rail line at Ashton Vale on a new deck. The maintenance track / cycleway continues and terminates at Ashton Vale Road, where the railway is crossed by a level crossing (See sheet 201749-PA-908 at Travelwest https://s3-eu-west-1.amazonaws.com/travelwest/wp-content/uploads/2016/10/avtm-general-arrangement-plans.pdf). On the opening of the railway to passenger trains to Portishead (as part of Metrowest), it is currently proposed to close the level crossing (providing a new access from the west to the industrial estate). This will also close the public footpath crossing to Barons Close.

The current proposed route for cyclists and pedestrians between Ashton Vale Road and Winterstoke Road is a diversion of about 300 metres via a ramp to Ashton Road, and a convoluted series of crossings, ramps and subways, all of which fall short of current guidelines for such facilities due to gradients, and width.

For cyclists travelling to South Bedminster / Ashton Gate, the diversion adds considerably to the journey time. Travelling towards the city, the route is much less attractive, more inconvenient and congested at peak times with school foot traffic.

We have written to MetroWest as part of the ‘Ashton & Pill micro-consolation’ suggesting that the direct link between the Metrobus cycleway and Winterstoke Road is maintained by creating a subway under the railway at Barons Close. This would require onward facilities on Winterstoke Road to link to existing cycleways. 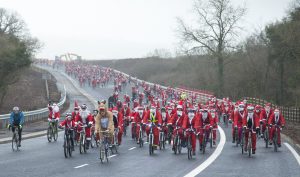 PS There was a dramatic ‘Santa Cycle Ride’ in December 2016 to mark the opening of the SBLR. Check out the Flickr gallery.