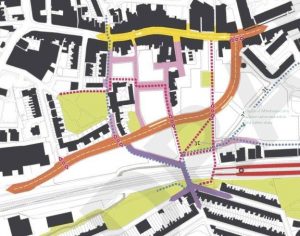 This is a very significant and complex development in particular due the density of the proposals and the use of high-rise blocks. These are of course also cycling issues. We’ve put forward the following response to the proposed Bedminster Green Placemaking Framework

Bedminster Green is a scheme of size and density that will place significant demand on transport infrastructure in south Bristol. The development will bring an influx of residents who are expected not to own a private car, so the volume of cyclists in the area will increase and investment in new cycling infrastructure is strongly justified.

If the Bedminster Green development is to realize the potential for cycling and walking trips then significant improvements to existing infrastructure within the site and in the surrounding area beyond the extents of the framework site are needed.

Firstly, improvements to cycle routes should be identified with reference to key trip generators and connections to routes of city wide importance within the transport assessment that is currently being undertaken by Peter Brett Associates. This should be supported by the work currently being undertaken to create the Bristol Cycling and Walking Infrastructure plan, but should also include connections to North Street, Redcliffe, the city centre and local schools.

Bristol Cycling Campaign recommends the provision of segregated cycle routes along the A38 corridor. It has been indicated to us that Malago Road/Dalby Avenue have been identified for bus priority measures, and that there is insufficient width to provide protected space for both buses and cycles. If this is the case an alternative all ages and abilities (AAA) high quality segregated route must be implemented covering the A38 corridor. Provision of a high quality route via Bedminster Bridge should be provided for trips into the city centre. We urge BCC to identify East Street as a location for future cycle improvements in the event of bus re-routing onto Malago Road.

Bristol City Council should also acknowledge that existing signed cycle routes through the area are inadequate and are not currently at an acceptable standard to enable the cycle mode share that Bristol should aspire to. Bristol City Council should also consider improvements beyond the scope of the framework itself such as improvements to the Malago Greenway and the Filwood Quietway, and also connections to the nearby shopping area on North Street.

We believe that the five principles applied in Dutch cycling guidance should form a guide for new cycling infrastructure in Bristol. These are – Coherence, Directness, Attractiveness, Safety and Comfort. The Malago Greenway suffers from a number of problems and fails to adhere to any of these principles. It is a mix of off road paths and signed on road routes. All of the off road paths are shared space with pedestrians, many of which have a poor and deteriorating surface of inadequate width. Most of the points at which off road sections cross roads are lacking in safe crossings and wayfinding signage is missing or inadequate.

The Filwood Quietway has some sections which have been recently been improved to a good standard, such as the section of segregated cycle track on Whitehouse Street and there are some other recent improvements in Victoria Park. Other parts are inadequate sections of shared footway and poorly signed on-road sections.

Within the boundary of the framework itself, motor traffic should be filtered on Whitehouse Lane so that through traffic is restricted to the A38/Malago Road, creating a network of low traffic streets safe for cycling and pedestrians, with high quality cycle and pedestrian crossings to connect across the A38, in addition to high quality segregated cycle tracks linking to city wide routes.

Page 67 of the draft framework identifies improved routes on Hereford Street/Church Lane. We support this route in principle but we note that the connection at the edge of St John’s churchyard is very narrow and would need to be widened. If this is not possible we would suggest that improvements to the existing route of the Malago Greenway on Little Paradise would be more suitable.

Page 67 of the framework also identifies routes on Clarke Street and Whitehouse Lane. We would recommend that Whitehouse Lane is provided with a fully segregated cycle track continuing to the existing track on Whitehouse Street and onto Bedminster Bridge. Bedminster Bridge is a significant barrier to cycling in the area and a development of this scale will need substantial investment in improvements to Bedminster Bridge gyratory system to provide safe cycling routes to the city centre and north Bristol. The existing cycle river crossing at Gaol Ferry Bridge is inadequate, at capacity at peak times and inconvenient for many journeys from this direction.

We are not opposed to improved cycling provision on Clarke Street and support its inclusion in the framework but it would also require improvements to cycle provision on Bedminster Parade to provide a safe, continuous cycle route. In addition to this Stillhouse Lane is cobbled and would not be a comfortable route for cyclists.  We recommend the provision of a fully segregated AAA route along Whitehouse Lane connecting to the existing track on Whitehouse Street, forming the main arterial cycle route from Bedminster Green to the city centre.

Given that the development would be predominantly car free, we would also want Bristol City Council to ensure that developers should make provision for a high standard of off road cycle storage and additional on road cycle racks.We note that there is not much space around the proposed buildings and it needs to be clear where the cycles can be stored and that the storage must be conveniently accessible.  Secure cycle storage at the station needs to be provided.

Delivery bays and routes to the buildings must be identified.  There is a risk that delivery and waste collection vehicles obstruct cycle routes.  These points need to be tackled at the masterplan level, not just in planning applications on individual development sites.

We support many of the proposed cycling and walking improvements identified in the Placemaking Framework document, and encourage Bristol City Council to adopt the suggestions made above. However greater attention must be placed on connecting the improved infrastructure within the boundary of the site to a city wide network of routes. This may come in the form of the transport assessment currently being undertaken by Peter Brett Associates.

Please note this response relates to the framework insofar as it concerns cycling and transport infrastructure, and should not be considered an endorsement of other elements of the scheme, some of which have been controversial.