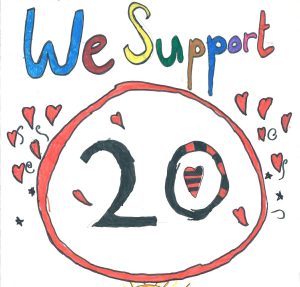 Bristol are consulting on 20 mph speed limits in the city (20mph Limits Review). We believe the city-wide ‘Total Twenty’ approach has been good for walking and cycling, and the evidence supports this. We’re concerned that the review seems to be wholly focussed on reversing this and allowing 30mph on many roads. There is almost no mention of eduction or enforcement measures to embed the change.

We’re asking everyone to respond to the review. There are suggestions below to make it quick and easy.

The exercise has benefitted from a UWE Monitoring Report which has found that Bristol’s 20 mph scheme has saved lives and reduced the number of people injured on our roads. Although we all know that speed limits are inadequately enforced, the UWE report found that road traffic speeds have decreased. We’ve made our contribution with a fact filled post on 7 Reasons Einstein would support 20 mph.

When elected, the Mayor, Marvin Rees, promised to “get Bristol moving” and said he would review the operation of the 20 mph scheme. This consultation exercise is part of that and asks whether the public would like speed limits increased on 78 roads and reduced to 20 mph on 5. The balance of roads to be consulted on, increased speeds v speed reductions, shows where Marvin’s heart is.

While the consultation on reducing the speed limit on the token 5 roads identified, especially Kellaway Avenue and Hotwell Road, is welcome, it is a great shame that the opportunity was not taken to consult on bringing in a 20 mph limit to roads such as those round the Downs, the ones that cut through Old Market or to Coronation Road in Bedminster.

Even more surprising is the apparent lack of concern with the well-documented additional risk posed by higher speeds, especially to vulnerable road users. In fact 28 of the roads being considered for faster speed limits either have schools on them or very close by. Some, such as Cranbrook Road, have been the focus of parent-led campaigns for safer routes to school. The Council’s response: to let vehicles travel even faster.

The Council collects and analyses death and injury incident reports by the police. “Accident cluster sites” in Stokes Croft, Park Street and Church Road as well as notorious roads like Gloucester Road are all included for consideration for faster speed limits. The evidence shows slower speeds lead to fewer deaths and fewer and less severe injuries. Faster road traffic speeds will make these roads even more dangerous. 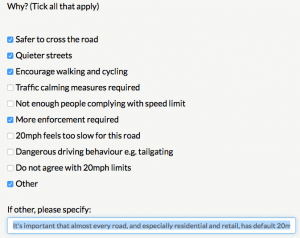 It is very important that cyclists make their voices heard and oppose faster speed limits for vehicles. The Council consultation can be found at: https://bristol.citizenspace.com/city-development/20mph-limits-review/

The survey is LONG but you only need to answer the first part, the rest is optional. Don’t feel obliged to give an answer for every single road, maybe just stick to the ones in your ward or neighbouring ones.

For each ward you will be asked for your view on changing speed limits on selected roads, with a list of prompts for why. This graphic suggests the important ones for cycling. If you think the increased dangers to schoolchildren and other vulnerable road users is important, you’ll need to write this under “other” reasons as it’s not something the consultation has taken on board.

It’s important that almost every road, and especially residential and retail, has default 20mph. Too many exceptions creates uncertainty about what the citywide default speed is and undermines the overall effect that we’re moving towards