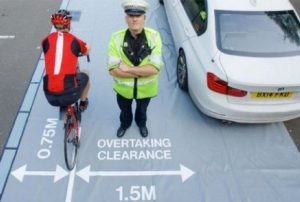 This is a key commitment in protecting people riding bikes from poor driving.

Fear of the dangers of cycling on the road with cars is one of the biggest barriers stopping people taking up cycling and the Bristol Road Justice group was formed as part of Cycling UK’s campaign for the rights of cyclists to use the roads safely. The Road Justice team work with Avon & Somerset Police (A&SP) to ensure that cyclists receive the right protections and to ensure that the police understand the needs and concerns of people cycling in the area.

The Road Justice team have met with A&SP a number of times over the last few years and in April 2015 they agreed to our requests to set up a “report a cycling near miss” facility on their website. Some 48% of the responses concerned overtaking highlighting the importance of this issue, one that is clearly linked to the fact that two thirds of the population believe that cycling is too dangerous for them.

Last autumn West Midlands Police (WMP) announced “Close Pass”, a new operation “that sees officers saddle up on some of the region’s busiest routes” in order to educate or prosecute drivers that put people riding bikes at risk (they discuss the operation in a comprehensive post on their blog).

On 15 December we met with Sue Mountstevens, Police & Crime Commissioner (PCC), and Chief Inspector Kevan Rowlands, Force Lead on Road Safety raising the issue of close passing and highlighting the work that WMP were doing to protect people riding bikes. They confirmed that they were already planning to attend a seminar WMP were organising in response to interest in their initiative.

Since then A&SP have confirmed that they will be launching a safety campaign of their own saying they were “working to implement this operation”.

The Road Justice team welcome this news and thank the A&SP and the PCC for listening to the concerns of the cycling community.

We have written to A&SP to try and find out how the operation is going and look forward to a response. It is crucial that the police maintain a focus on danger reduction and don’t rely on a short lived “week of action”.

Cycling is great for Bristol. The Bristol Road Justice team work with the police to make Bristol safe for people riding bikes. Find out more about what we do here. If you’d like to support Bristol Cycling you can join us here.