Bristol’s 20mph zones work and should be copied across Britain (please note, Bath) 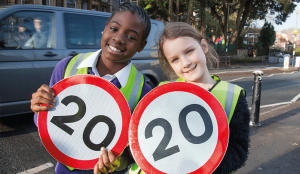 Last month a review of Bristol’s 20mph areas was published by UWE with coverage in local media (here, here and here). This adds to the growing weight of evidence backing city-wide lower speed limits (unlike a widely ridiculed ‘report’ from Bath and North East Somerset Council (BANES).

UWE’s Bristol Twenty Miles Per Hour Limit Evaluation (BRITE) study found that, on average, speeds on more than 100 surveyed roads have reduced since the 20mph speed limits were implemented, with average speeds of between 19mph and 26mph on 20mph roads shown in the report.

On 30mph streets, average speeds on the roads surveyed were below 30mph in every area.

The lower speeds were also found during night and summer times, when there is typically less traffic to slow motorists.

Other key findings were:

Bristol Health Partners headed their piece on the report 20mph speed limits in Bristol save lives, reduce injuries and save the NHS £15 million a year.

The report will be used in Bristol’s 20mph review to start this Spring. There are hopes that this latest research will act as a brake on any attempt to reverse 20mph or diminish its scope, notably from Cllr Mark Bradshaw in a guest blog on Sustrans website, Making the case for 20mph speed limits in Bristol. He was closely involved in the planning and implementation of this innovative change for Bristol. In the blog, he shares with us why he originally supported the implementation of 20mph limits, and why he still believes in the programme.

I was convinced by two factors in particular during my time in Cabinet:

So, it was both an issue of equality and survivability. There is a similarity here with air pollution and the greater exposure to toxic air experienced by populations in poorer areas.