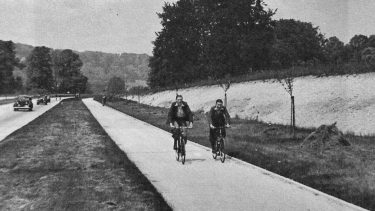 Did you know that in the 1930s, the Ministry of Transport commissioned the building of protected cycleways?

We’ve heard about an exciting Kickstarter project from Carlton Reid and John Dales. Ultimately they want to revive Britain’s long-lost 1930s cycleways. These lanes cover 280 miles of safe cycling space but currently they are hidden from sight.

A small team will trawl the archives and evaluate these schemes. Then they will approach local and national authorities with plans for meshing the 1930s cycleways with their modern equivalents. If they exceed the initial target they will be able to research a greater number of schemes and push for grants to enable rescue work to take place.

You can read more about this project, its historical background, and how you could get involved in supporting something of potentially national importance, on Carlton Reid’s Kickstarter page – Let’s rescue Britain’s forgotten 1930s protected cycleways

The initial £7,000 goal has now been exceeded, with 283 backers. If the pledges exceed £12,000 all levels above ‘Pizza Level’ will have access to a new podcast featuring cycling history from 1817 onwards.

The number of pledges could play an important later role when they start seeking institutional funding required for national-scale cycleway improvements. Strong support would show there’s genuine interest in bringing back – and improving – these 1930s-era cycleways.