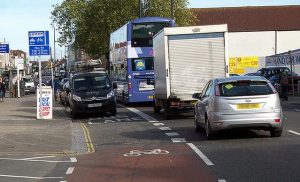 Who knew that Gloucester Road was a brilliantly successful cycle route? Numbers at peak times have doubled over the last decade while motor vehicle numbers have dropped by a fifth.

We know this because traffic flow data from an annual census published online by the Office for National Statistics allow detailed analyses and comparisons for cycling levels on major routes at a local level. About 100 census points around the city are monitored for a full day and all forms of traffic are counted. See Cycling Trends in Bristol for more.

If a road like this, with very poor provision for cycling, can show a steady increase in cycling over a sustained period we can be very confident that Bristol City Council is right in making cycling a significant part of its transport policy for the future. People are making a big effort to use bicycles, even on roads like this. This gives the Council an opportunity, and a responsibility, to respond in an even more confident terms than their new Cycle Strategy sets out. 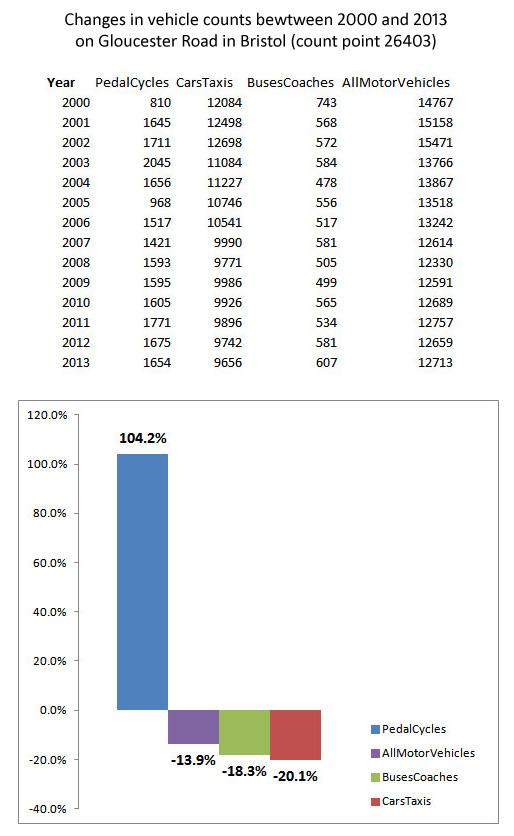 Bicycle travel has been going up steadily over ten years. It has doubled while car and taxi traffic has gone down by a fifth. Whatever the underlying causes, the message is clear: cycling can thrive in adverse conditions and if given proper space it could make a huge contribution to public health, to well being and to the economy of Bristol.

This is not just a “cycling” thing for “cyclists”. The fact that so many people have been using this route while other modes of transport dwindle suggests a strong trend that wants to run. Ten years is hardly a fad. Ten years’ growth is significant and we think Bristol City Council has every right to feel and act very bullish about the future of cycling as a much bigger part of a greener and healthier future for the City.