Manifesto for Mayoral Candidates – May 2016 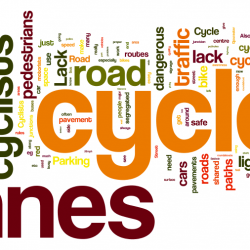 We have had over 600 responses to our survey on what people think about cycling in Bristol. Most responses were from those who cycle regularly, 73% cycle more than 3 times a week, and the main motivations were for excecise and pleasure, commuting, and concern for environment There is strong support for removing motor traffic from shopping areas to create ‘Living Hearts’. and 3 out of 4 saya there’s not enough secure cycle parking. People want police to priortise cycle theft. in 20mph local areas half support further traffic slowing measures, but others feel these don’t help cycling and cause other… 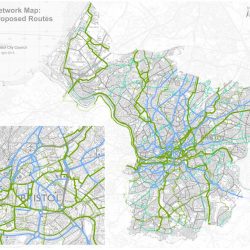 We are very pleased to see the publication of a draft cycle network map for Bristol (excluding South Gloucestershire). One of our main critiques of the Bristol Cycle Strategy published earlier this year was the absence of any delivery plan or sense of where things needed to be done, other than inclusion of the Top Tube map from our Bristol Cycling Manifesto. This is real progress and represents a lot of work by knowledgeable people within the Council. Now it’s down to us and all those who ride the streets of our cycling city to challenge the assumptions, knock off the…

Three guides to Space for Cycling

Local councillors fail to back Space for Cycling

Bristol has only managed to come forth out of the 8 English Core Cities in terms of the number of councillors signed up to support Space for Cycling. Although some local coverage seem to regard this a good showing, BCyC is angry and ashamed that in our ‘Cycling City’ and ‘Green Capital’ that this is the level of political support for making our city more liveable and sustainable.
We know that two thirds of people say they are too afraid to cycle on our roads, but also that the majority of under 35s in employment now choose not to commute by car, with ever increasing numbers cycling. These are the young, energetic and highly qualified group which employers are crying out for and so are backing cycling.

We will be pressing councillors in Bristol, South Gloucestershire, North Somerset and BANES to sign up to support Space for Cycling. You can help by using the quick and easy form at space4cycling.org.uk to send a letter to your local councillors.

Here’s the press release: 051114_CTC_press_release_core_cities_s4c_bristol_0
Newcastle, Manchester and Nottingham have highest levels of support for cycling
With the Government offering the possibility of funding for local authorities that can demonstrate commitment to cycling, CTC and local campaign groups have today (Tuesday 18 November) launched a league table ranking English Core Cities’ support for cycling, based on the number of councillors backing the Space for Cycling campaign outside London. The Core Cities represent the councils of England’s eight largest non-London city economies.

The national Space for Cycling campaign was launched 6 months ago by CTC and local campaign groups, with funding from the Bicycle Association, based on the campaign of the same name initiated by the London Cycle Campaign. The campaign calls on councillors to make cycling a safe, convenient and enjoyable option for day-to-day journeys for people all ages and abilities. This requires a combination of protected space on fast or busy main roads, low traffic volumes and speeds on local routes, and quality links including through city centres.

Our friends at Living Heart for Bristol have made some interesting points in their response to the consultation on the draft cycling strategy. In particular that cycling is at 8% in Bristol at the moment and the increased spend would take investment to only 5% of transport budget. You can read our response here. Recently-published figures by The Treasury have cast doubt on the claims of some local politicians that Bristol is planning to spend too much on cycling.  The Public Expenditure Statistical Analysis for 2014 show that total public spending on transport in 2013/14 was £22.2bn –…

On 22nd July there was a full council debate on cycling, thanks to over 4,000 people who want to make Bristol better for cycling and signed the Bristol Cycling Manifesto. We read out an opening statement (below) and then there were responses from four party groups, Liberal Democrats, Greens, Conservative and Labour. Then the Mayor responded. You can watch the debate at www.bristol.gov.uk/webcast, but it wasn’t online as of 24th July so we’ve embedded it below.

Below is the text of our opening statement. Here is the motion that we presented Manifesto Motion for Council 22 July 2014 (not debated in this form), however councillors will only saw a cut down version Bristol Council minutes 2014 06a1 – petition – cycling manifesto – report.

We need to make sure councillors know this is a big issue for Bristol so please use Space for Cycling to send them an email. You can check who has signed from Bristol and surrounding councils on this national map. 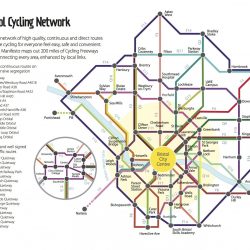 Bristol Cycling Campaign has produced a concise strategy for cycling in Bristol. This sets out how we will achieve Space for Cycling.

The strategy is affordable, maintaining current spending levels of £16 per head of population per year, and can be delivered in just 12 years for a total of £109m.

We have mapped out the network of strategic routes shown here that connect every neighbourhood. These can also be seen in an innovative ‘Top Tube’ map to make it really clear.

Our vision is for every street to be a cycling street, linked by 200 miles of Cycling Freeways and Quietways. There are three elements to the network:

Space For Cycling: report on Bristol’s Big Ride, 17 May

The lively contribution of Roger Geffen (CTC) to to Bristol Cycling Campaign’s Annual General Meeting led us to organise Bristol’s own ‘Big Ride’ in support of Space for Cycling, coinciding with a huge event in London and others across the country, including in Birmingham, Leeds, Liverpool, Manchester, Newcastle and Sheffield. Bristol City Council Assistant Mayors Mark Bradshaw (Labour) and Gus Hoyt (Green) were both in supportive attendance on the day. Near the beginning, Mark Bradshaw spoke enthusiastically about the cause of cycling. He then cut a red ribbon on the (not-quite-finished)…

A Strategy for Cycling in a European Green Capital

(Article updated 10 July post the event – with links to presentations and speaker names added.) Bristol Cycling Campaign hosted an event on Weds 9th July to review the Bristol Council Cycle Strategy and to prepare the way for the 2014 Bristol Cycling Summit, which will be in the autumn. It was at City Hall from 5:30pm – 7:30pm on Weds 9th July. Come along for a concise overview of what’s going on in Bristol and summary of what to expect over the coming years. This will see the opening of consultation on the official Bristol Council…