Could we have a temporary Brislington Tramway railway path? 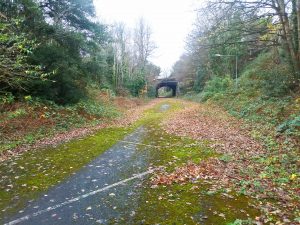 There’s real momentum building behind the Brislington Tramway, a ‘missing link’ on the railway path linking Whitchurch, Hengrove and Brislington with the centre. There is a planning application until end of April that needs our backing. Please add a comment to show your support.

“The Tramway” is the project name for opening up this fantastic route which would link the existing Whitchurch Way greenway (NCN3) from Whitchurch & Hengrove past Knowle, through Brislington via the railway path and onto the River Trail through St Phillips Marsh to Temple meads (NCN3). This would form an almost completely traffic-free route into the city centre.

Local residents and the cycling community have long campaigned for the railway line to be opened up. But we’re challenged by the long standing, yet undefined, plans to exploit the route for a road solution to A4 transport issues and congestion. The “Callington Road Link”, CRL is a proposal which has existed for over 10 years to use the route, but due to lack of funding has not materialised. Bristol Cycling Campaign understands that the CRL plans are by no means concrete and indeed are evolving as the transport vision adapts after the pandemic.

We understand The Tramway is receiving political backing from Bristol council as a ‘meanwhile use’ solution consisting of a walking and cycling path. It’s now expected that any future developments for a road/public transport corridor on the railway line, if they do indeed happen, would definitely include a quality segregated cycle path. We applaud a focus on opening the route as soon as possible and making use of it for the benefit of residents and the wider community as soon as possible. 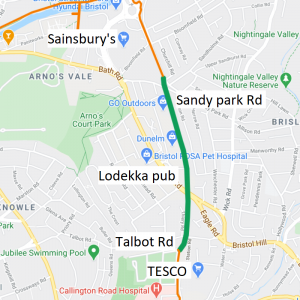 The Tramway is a collaboration between different organisations, one of which is proposing to site shipping containers along a stretch of the path in order to give small enterprises affordable premises. A similar example would be Wapping Wharf. This element of the scheme is not yet in the public domain. The containers would allow plenty of space for a wide path and add interest to the path, which could include small cafes or bakeries perhaps.