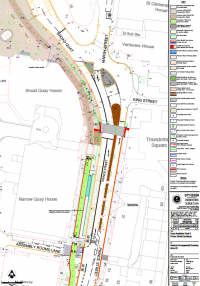 Travelwest have published their plans for a separated cycle lane along the length of Prince Street, from the Bridge (where work has already commenced) to Broad Quay.

The plans show plenty of separation between bikes and cars, well above the recent standard of ‘shared space’ (that is, pavement cycling). Taking the cycle route inboard of the footway around Broad Quay could be questionable as design standards invariably say put pedestrians inboard of bikes, not next to motors. But it may be the bus stops or the many crossing movements here that have influenced this.

Also the weak link in this design is the section north of Prince Street along Broad Quay. The cyclist either cuts across an extremely busy pedestrian ‘shared space’ area towards Park Street, or continues along Broad Quay to end up at Baldwin Street. It doesn’t make sense why a segregated path could not be continued through this space to link Park Street with this route as well as the new route from Baldwin Street.

Detailed plans can be found here.

For now we are assuming this will now go ahead, though do let us know what you think, as it’s not too late to influence some of the detail in the plans.. Please leave a comment, send an email or come along to one of our Space for Cycling forums.