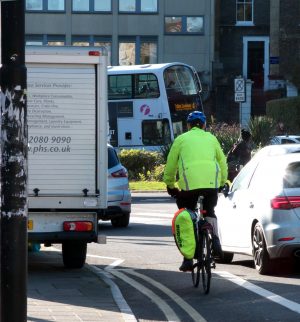 Bristol Road Justice has been in contact with Avon and Somerset Police as to the action they are taking with regard to enforcement action against dangerous drivers.

In 2016 police recorded that 285 cyclists were injured in road traffic collisions (ten year average 262). In 26 cases the injuries were recorded as “serious”. (Warning: many incidents go unrecorded and the level of injury is often miscategorised as less serious.)

Although figures for cycling casualties were up on the previous year, the figures do not show a long-term upward trend. Nor, given the increase in the number of cyclists over the last ten years, do they show that cycling is a dangerous form of transport. That is not to say that the level of death, injury and intimidation on Bristol’s roads is in anyway acceptable.

We asked the police what action they had taken in relation to a sample of cases where their reports suggested the driver was at fault:

The impression given is that Avon and Somerset Police will not even consider enforcement action unless very serious and obvious injury is caused and this partly explains why the majority of Gloucester Road and car dooring cases were not pursued.

That someone knocked off their bike by a carelessly opened vehicle door is injured is entirely predictable, far less predictable is the extent of their injuries. In fact such incidents can result in fatalities as the recent case of Sam Boulton in Leicester has shown.

We have written to Avon and Somerset Police’s Head of Road Safety and asked for details of their charging policy in such cases.