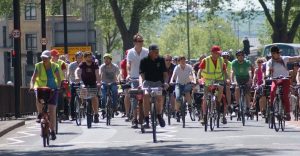 Bristol is also one of 7 cities working with Sustrans to produce Bicycle Accounts in 2015 and 2017 containing a range of statistics about cycling in the city. The first report is due to be released in October this year.

Let’s start with the differences between the sets of data from the Dept for Transport (DfT) and those from Bristol Council (BCC). Bristol has been recording traffic annually in a series of cordons around the centre for many years. Some of these are shown in the map below. For our purposes we’re looking at the BCC counts from the point on Cheltenham Rd just north of Arley Hill, while the DfT sampling point is just north of Claremont Road, about 700m apart.

The DfT figures show a lot of variation while the BCC ones are more consistent and are considered of higher quality. The key point is that they show a significant increase in cycling and a decrease in car use. This is reflected also in the trends in cycling to work rates in the wards north of the centre.

A contact at Bristol Council comments that “The issue with the DfT data used is that the DfT conduct a 12 hour count every 3-5 years and then estimate the rest to get an annual average day 24hr count. At the Gloucester Road site identified in the news story, actual counts were only conducted in 2001, 2003, 2005, with the last count in 2007. Bicycle use can vary wildly in these counts as the ‘factoring up’ is based on a small sample size compared to the car counts.” 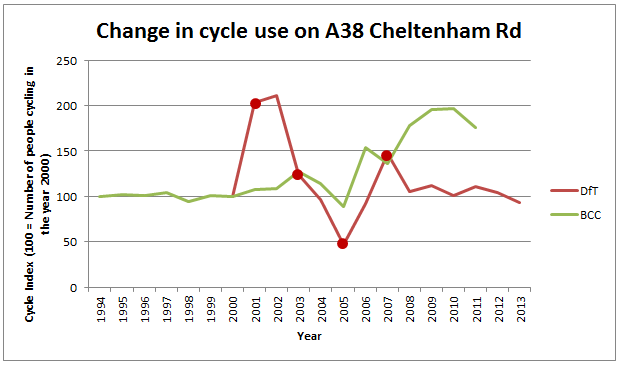 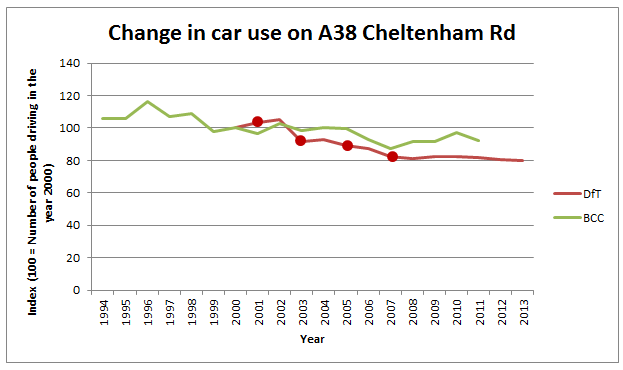 On an average weekday 16,500 vehicles per day passed the count point (24hr 2way), with 6,200 heading north and 10,300 heading south. The Figure below shows the flow profile on a weekday, Saturday, and Sunday. The biggest peak occurs between 08:00-09:00. Traffic drops off significantly at weekends, with a drop during school holidays. 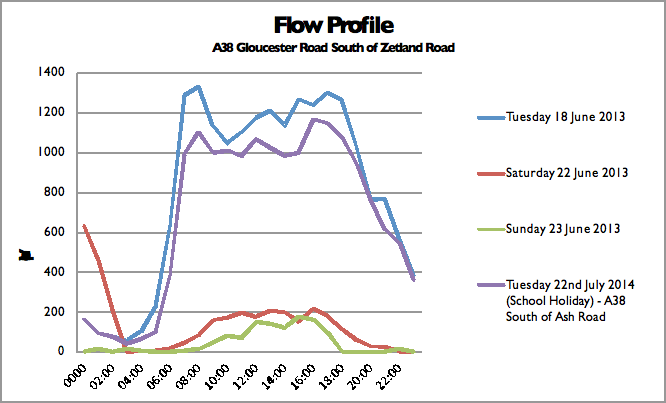 This table shows speeds at the traffic count point by the arches on Cheltenham Rd on Tuesday 18th June 2013. Mean speed is the average speed. 85th percentile speed is the speed at or below which 85 percent of people drive.

However, this is only a point speed. The average speed recorded between Ashley Down Road and St James Barton Roundabout (The Bearpit) was 13.5mph between 08:00-09:00 on an average weekday in 2014. This compares to an average recorded cycling speed on this route of 16.0mph.

Averaged across the day, cars make up a greater proportion of traffic as the number of bicycles decreases.

Cycle use now represents 7% of all traffic during the peak hour within the city. 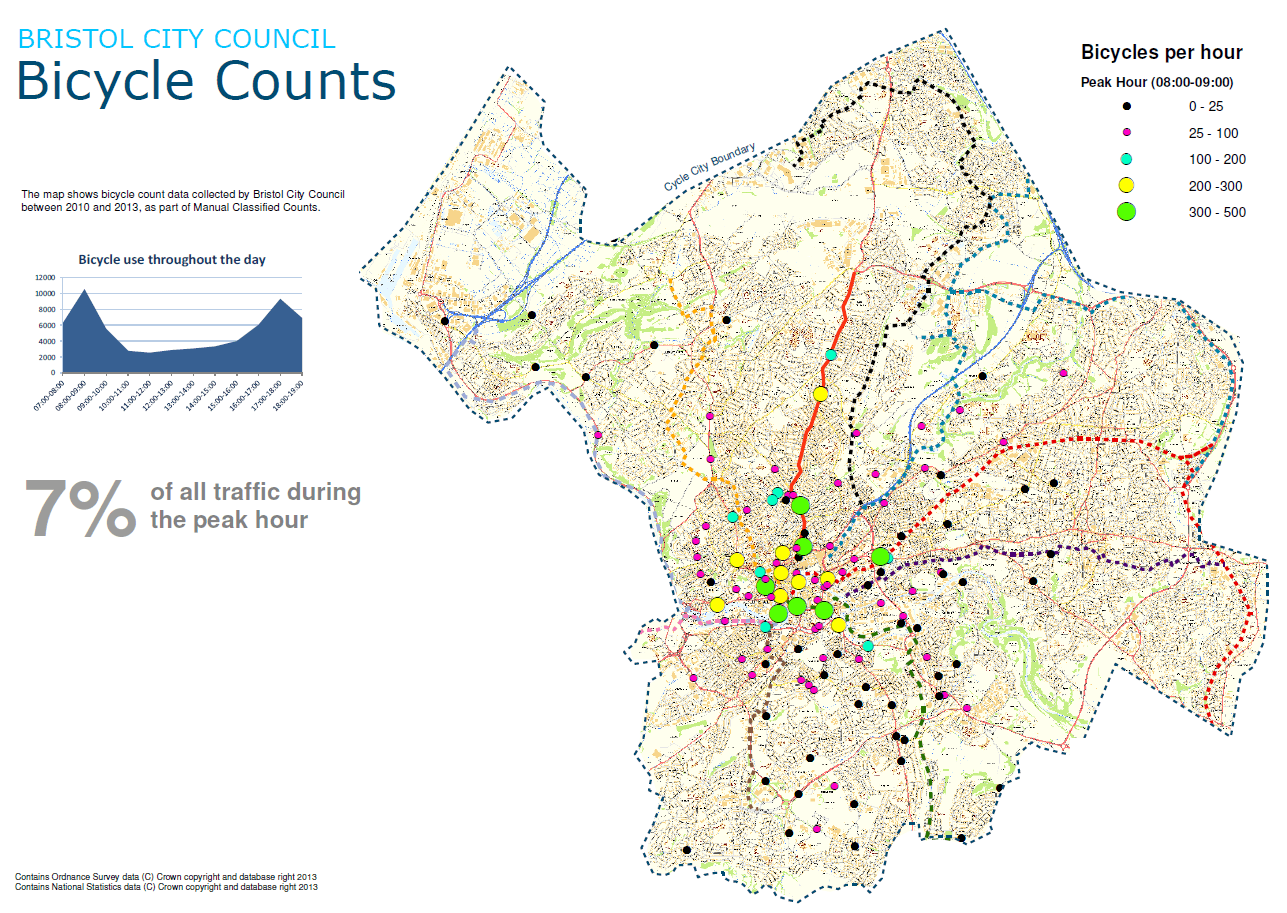 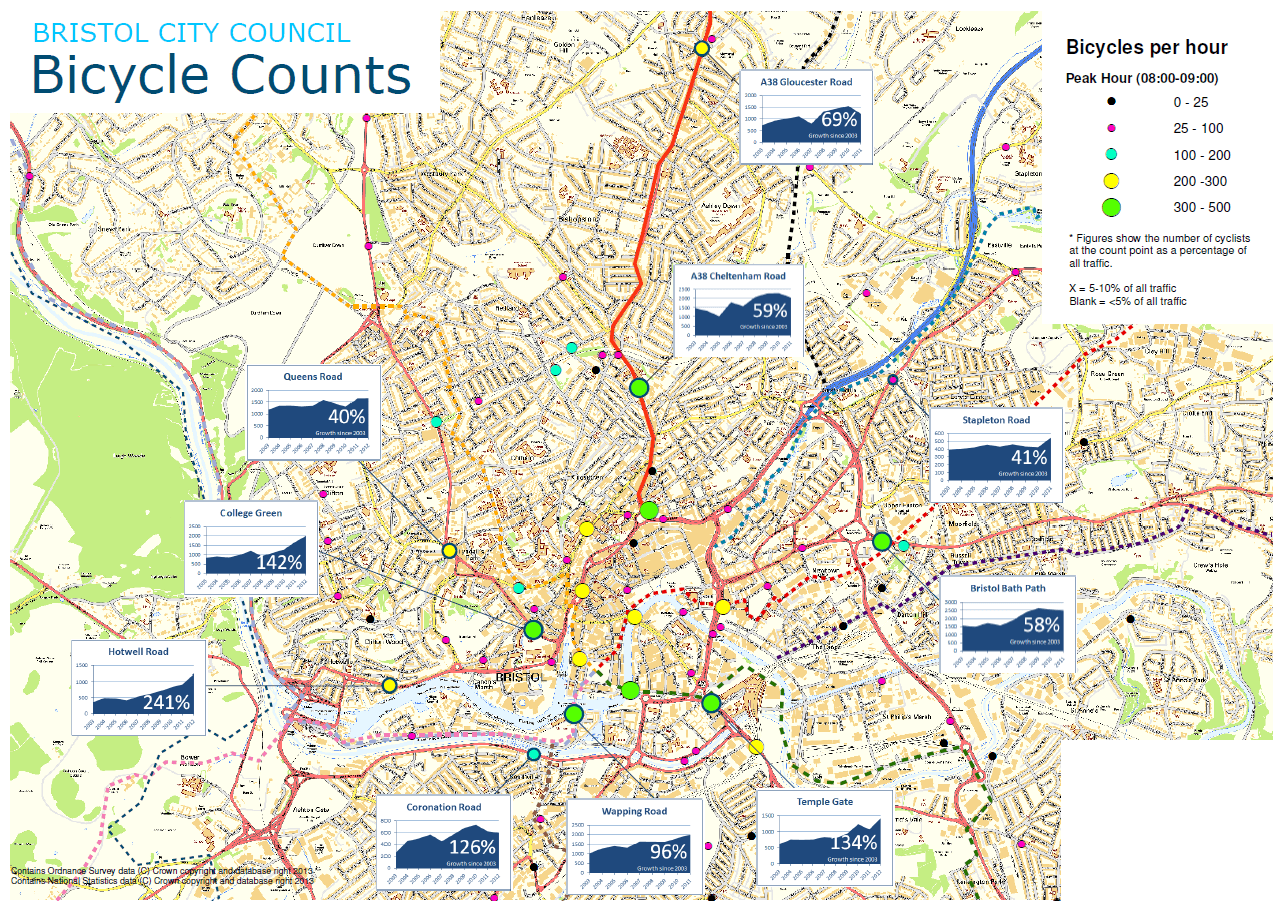 There are now four busy roads into central Bristol where people on bikes now make up over a quarter of all traffic during peak hours. This follows on from the number of wards where cycling to work rates exceed 15% and where the majority of under 35s in employment in Bristol now choose not to commute by car. Lots more information from the 2011 census is at http://www.bristol.gov.uk/page/council-and-democracy/census-2011. The CTC has a useful summary of cycling statistics.