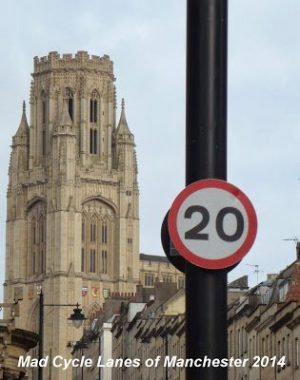 One of our founder Campaign members comments on how cycling has changed in Bristol – you can read the full article, and others about Bristol and what’s happening in Manchester and elsewhere on his Mad Cycle Lanes of Manchester blog

On a very brief trip to Bristol a couple of weeks ago I took the opportunity for a walk round to see if I could understand why cycling is becoming a real success story there.

It is 15 years since I lived in Bristol, and some things have changed quite a bit.

For a start the entire city centre and beyond is all one big 20mph zone.

There are also contraflow cycle lanes on almost all the one way streets. 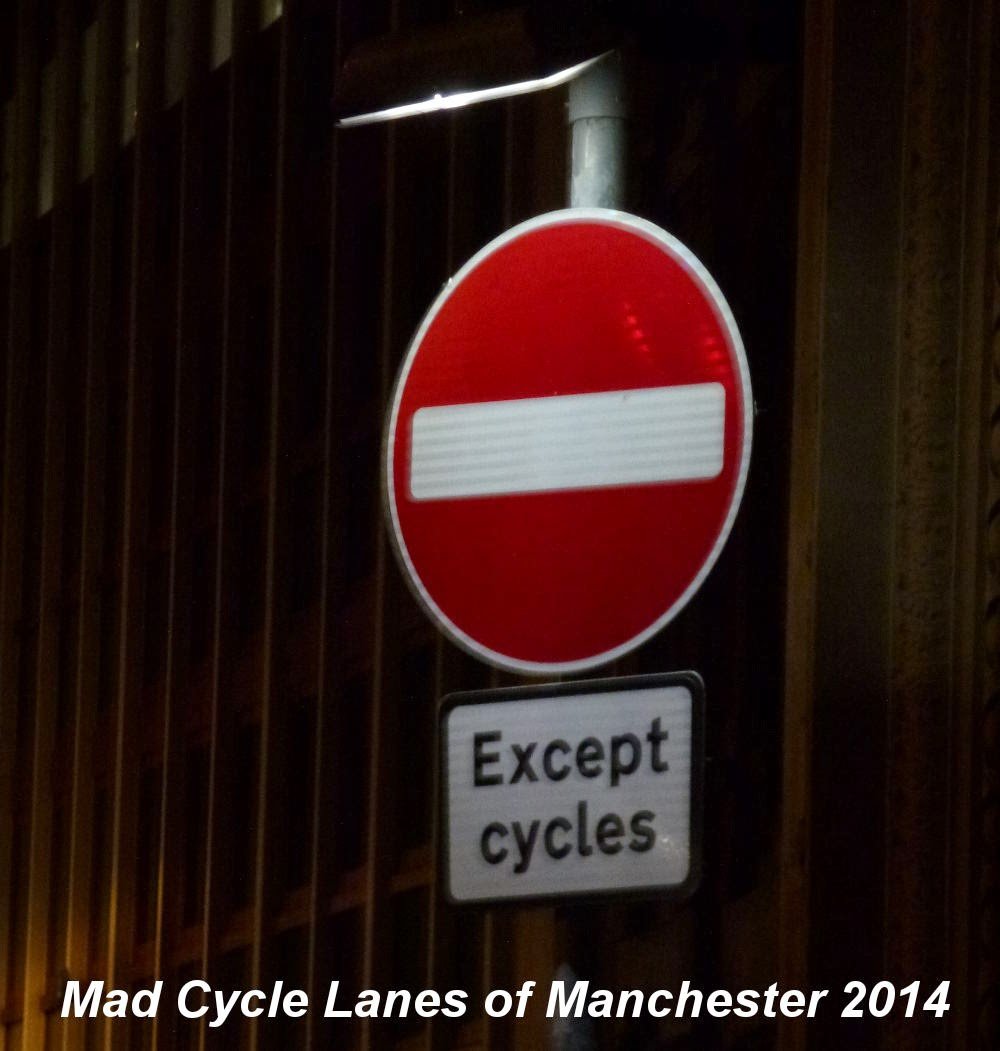 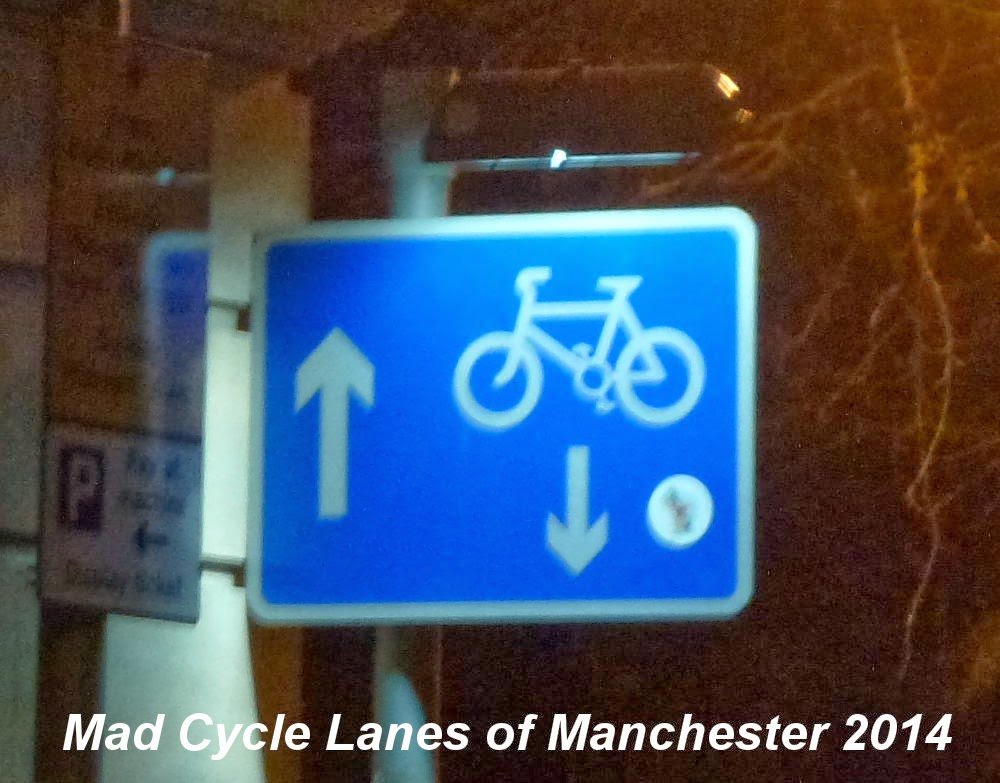 This one near Broadmead has been there a very long time, 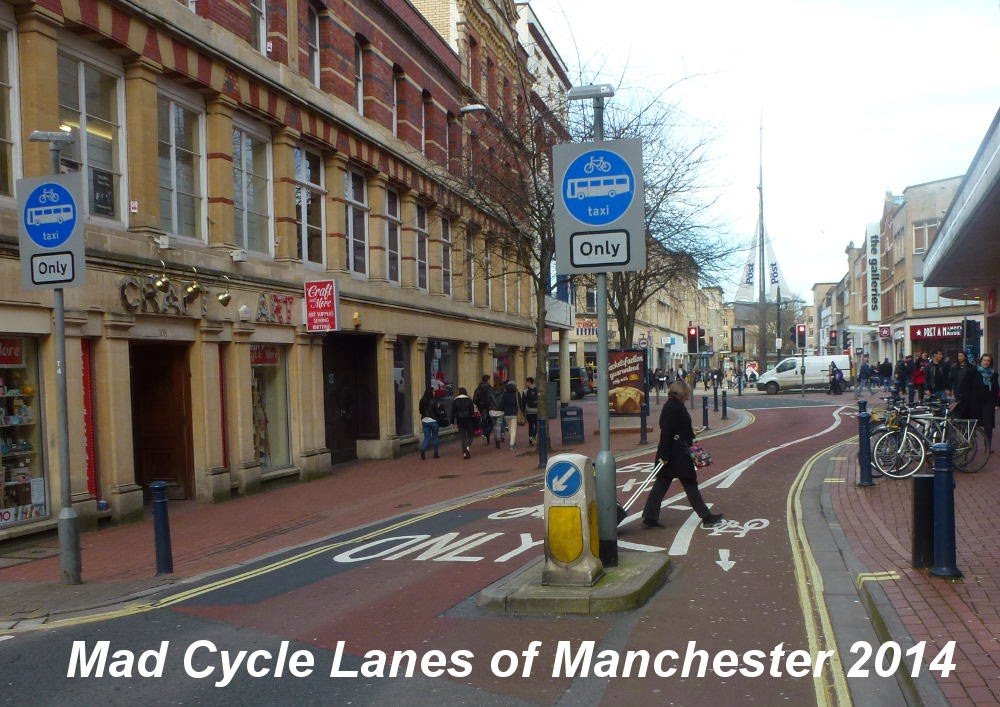 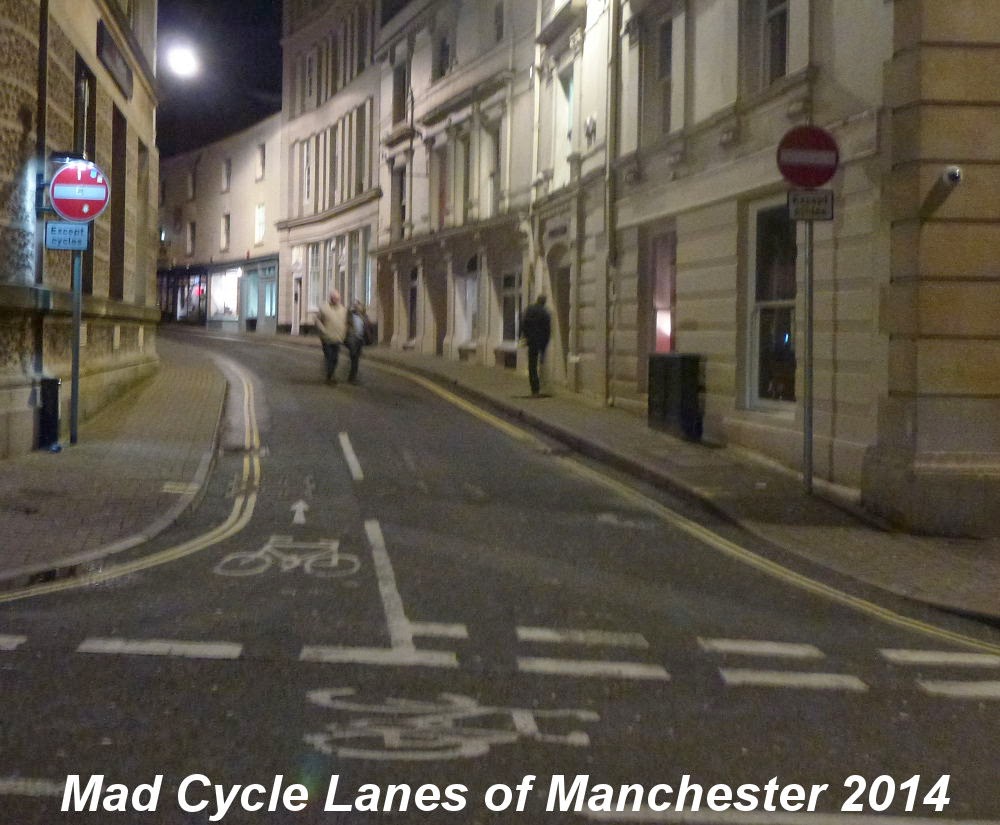 So why does Bristol have double the weekly level of cycling of Manchester?

Figure 1. Proportion of residents who cycled (any length or purpose) at least once a month in England’s 8 core cities (plus Bath and East Somerset, North Somerset, and South Gloucester during 2010/11 – from Considerate Cycling 39

There are a lot of people on bikes in the centre of Bristol, 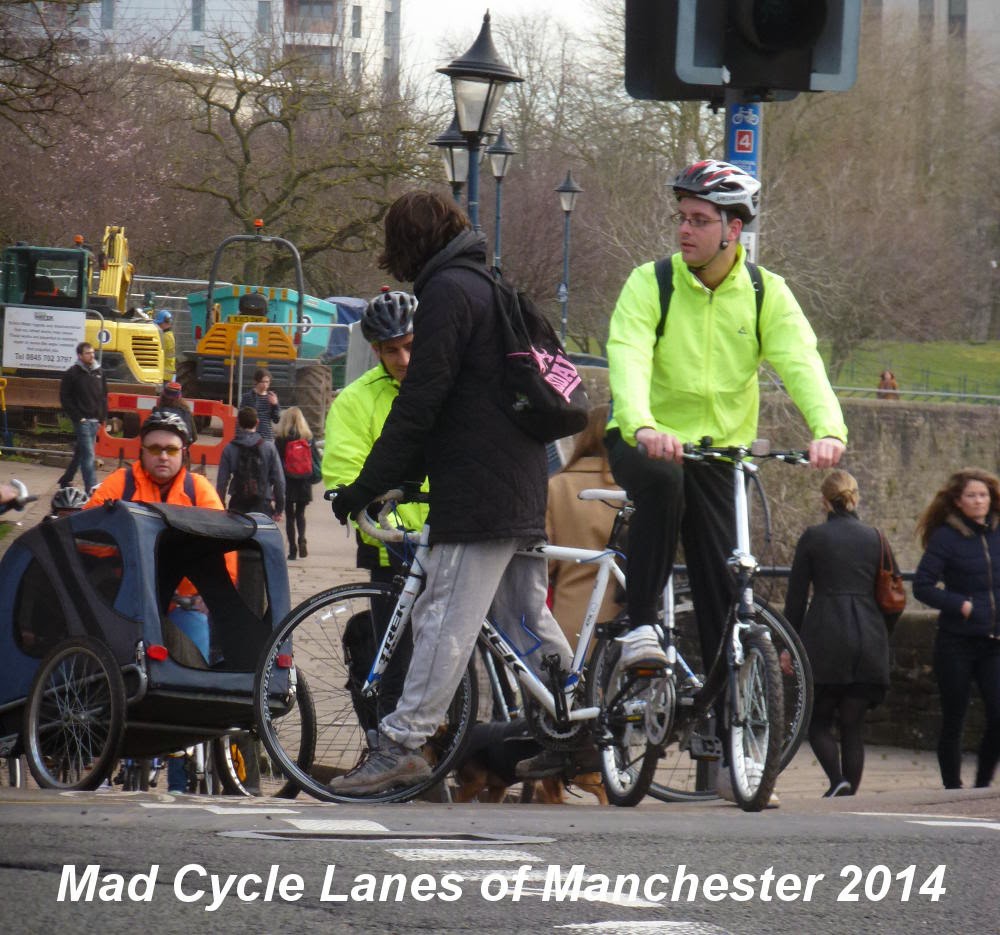 even where there is no obvious infrastructure, 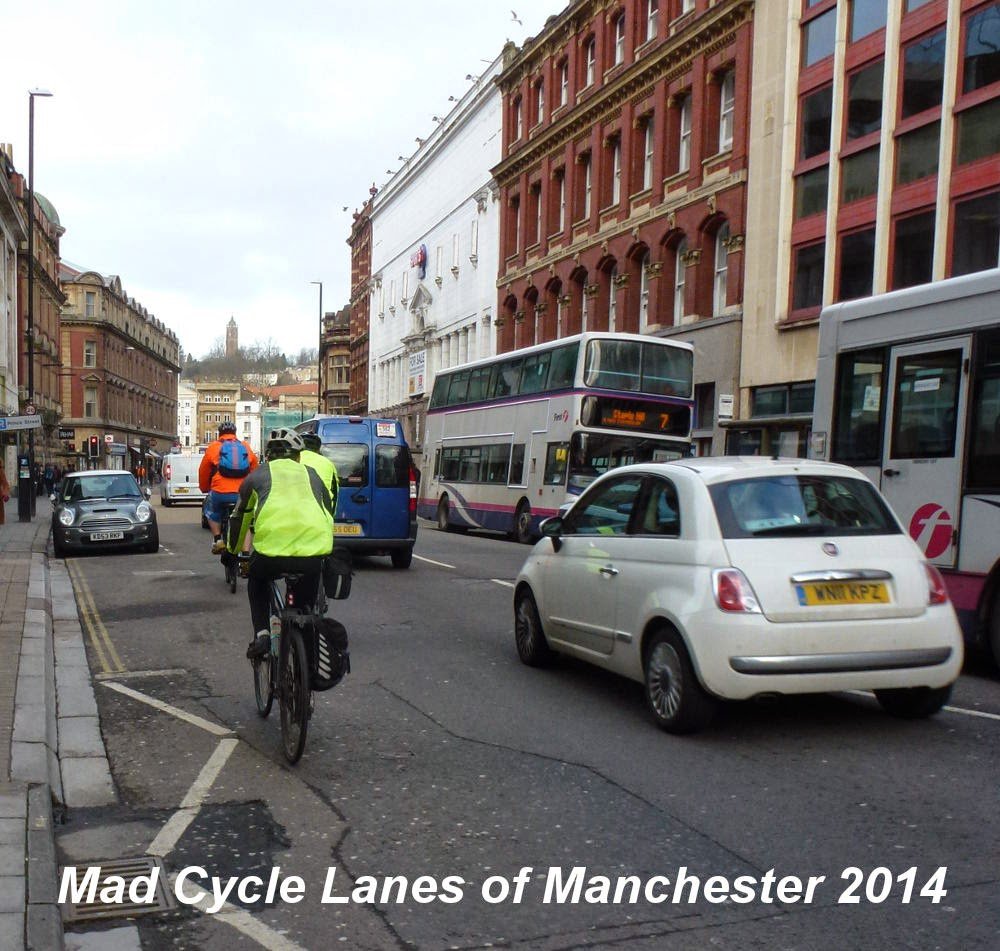 and there is a good variety of approaches to cycling clothing. 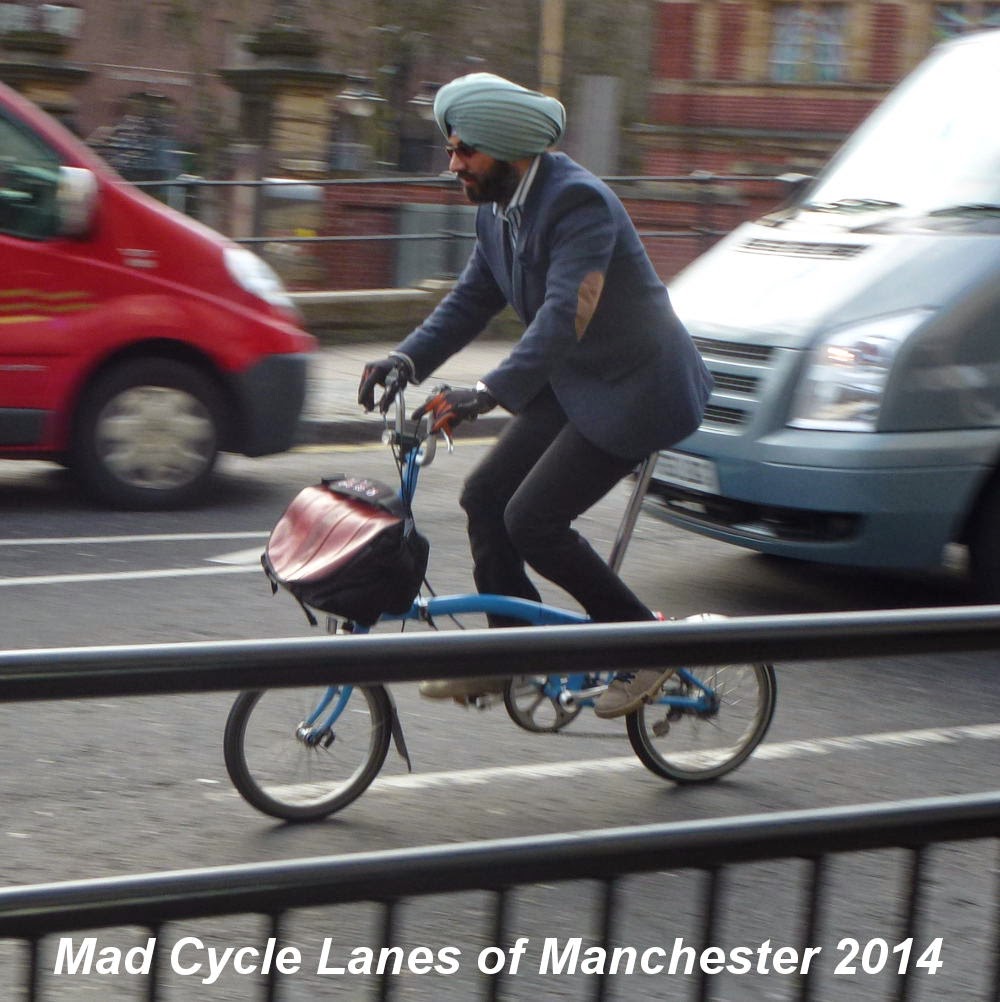 This is despite the fact that Bristol wont win any prizes for cycle lane maintenance, 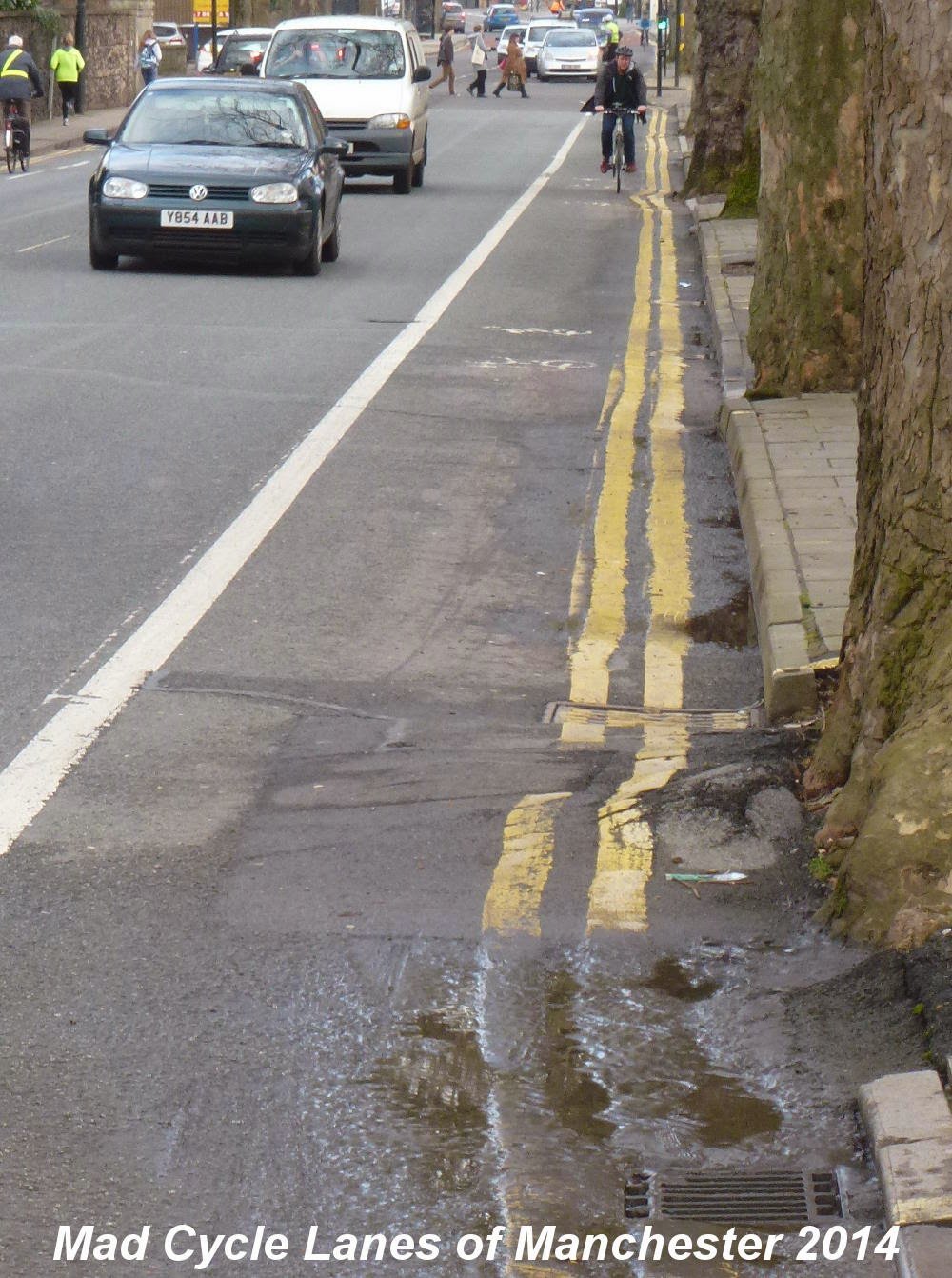 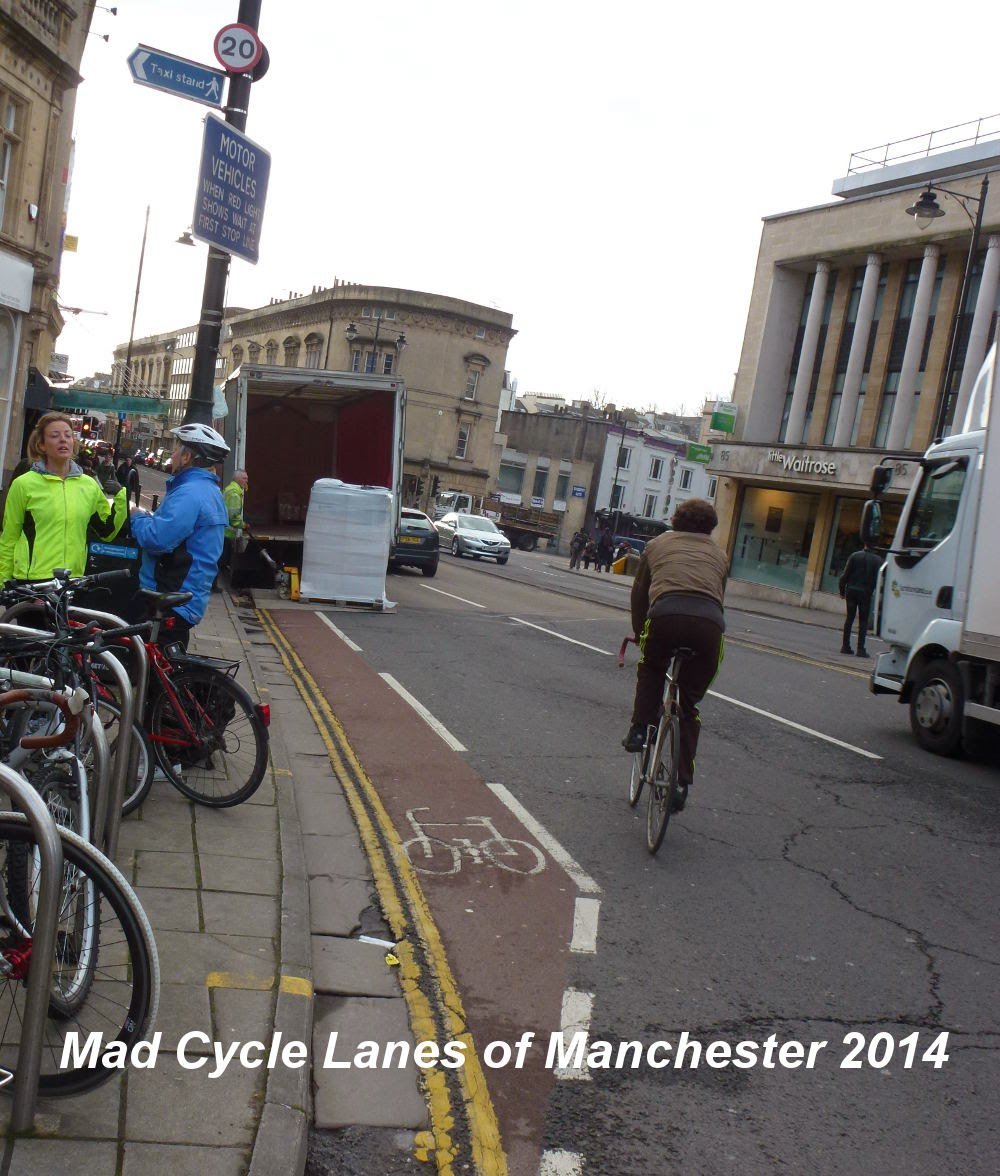 And their traffic free routes get obstructed too, 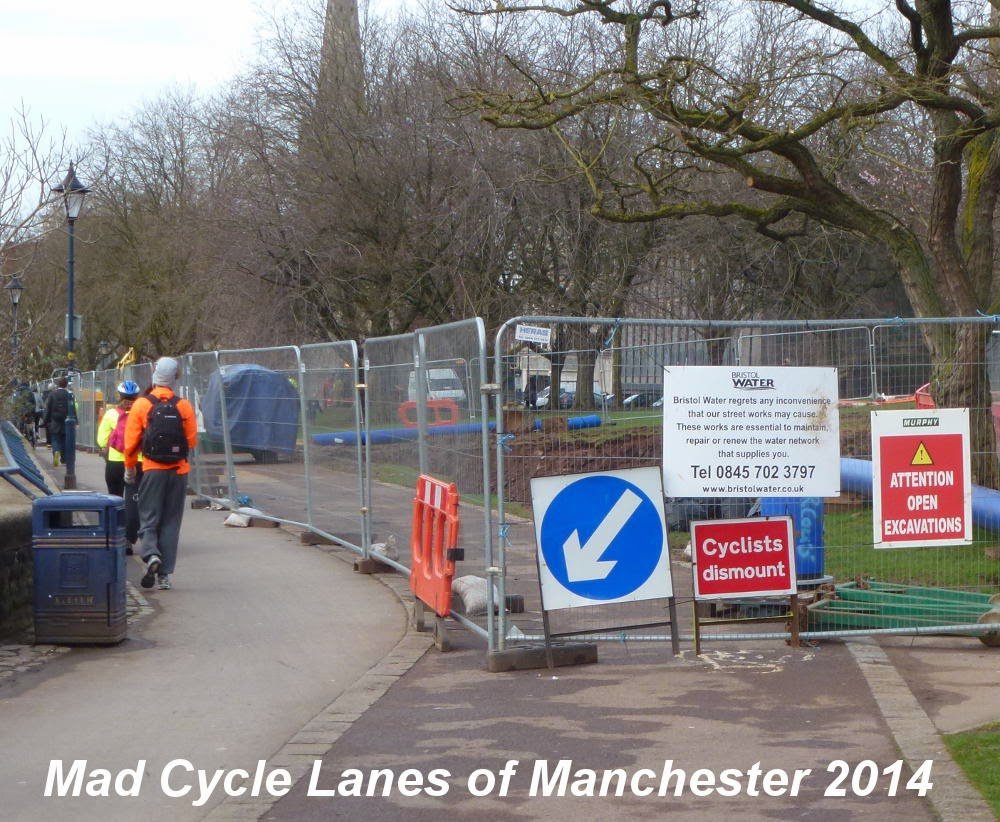 and there were several of these signs about the place 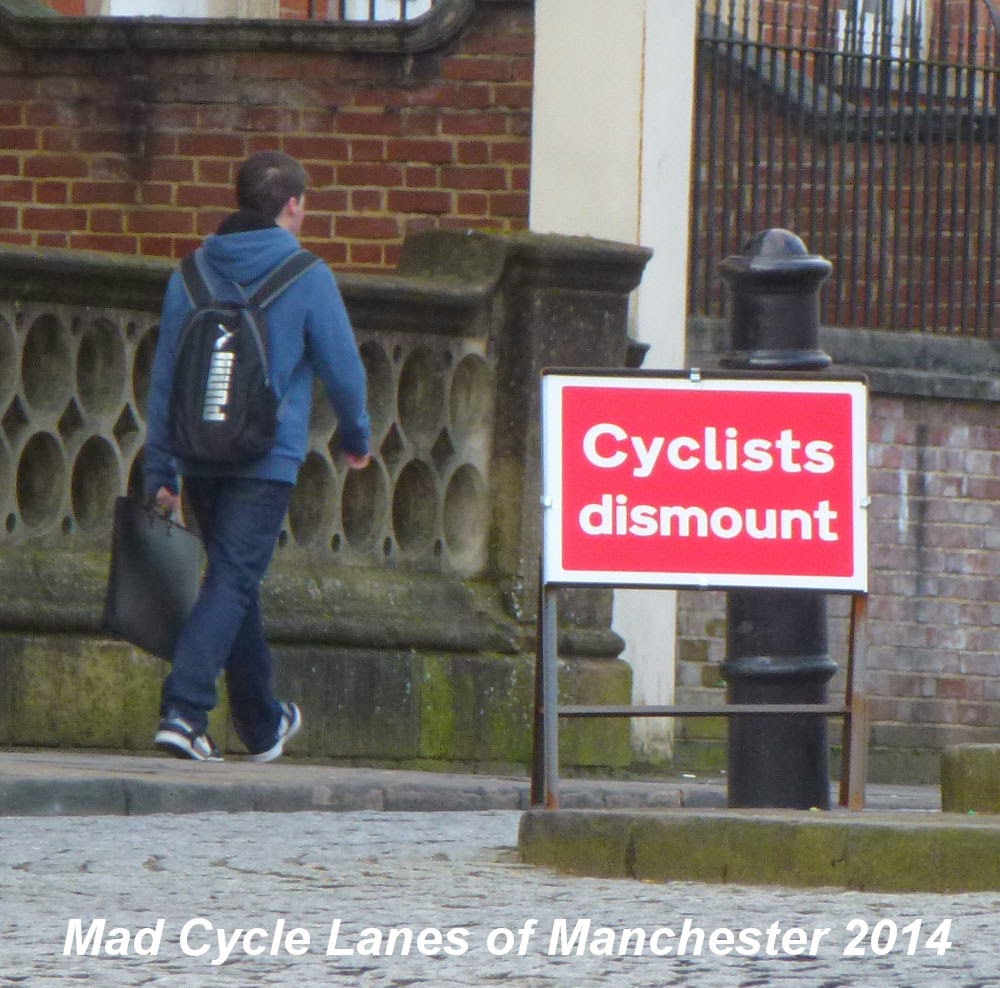 It may have helped having Sustrans head office in the city, 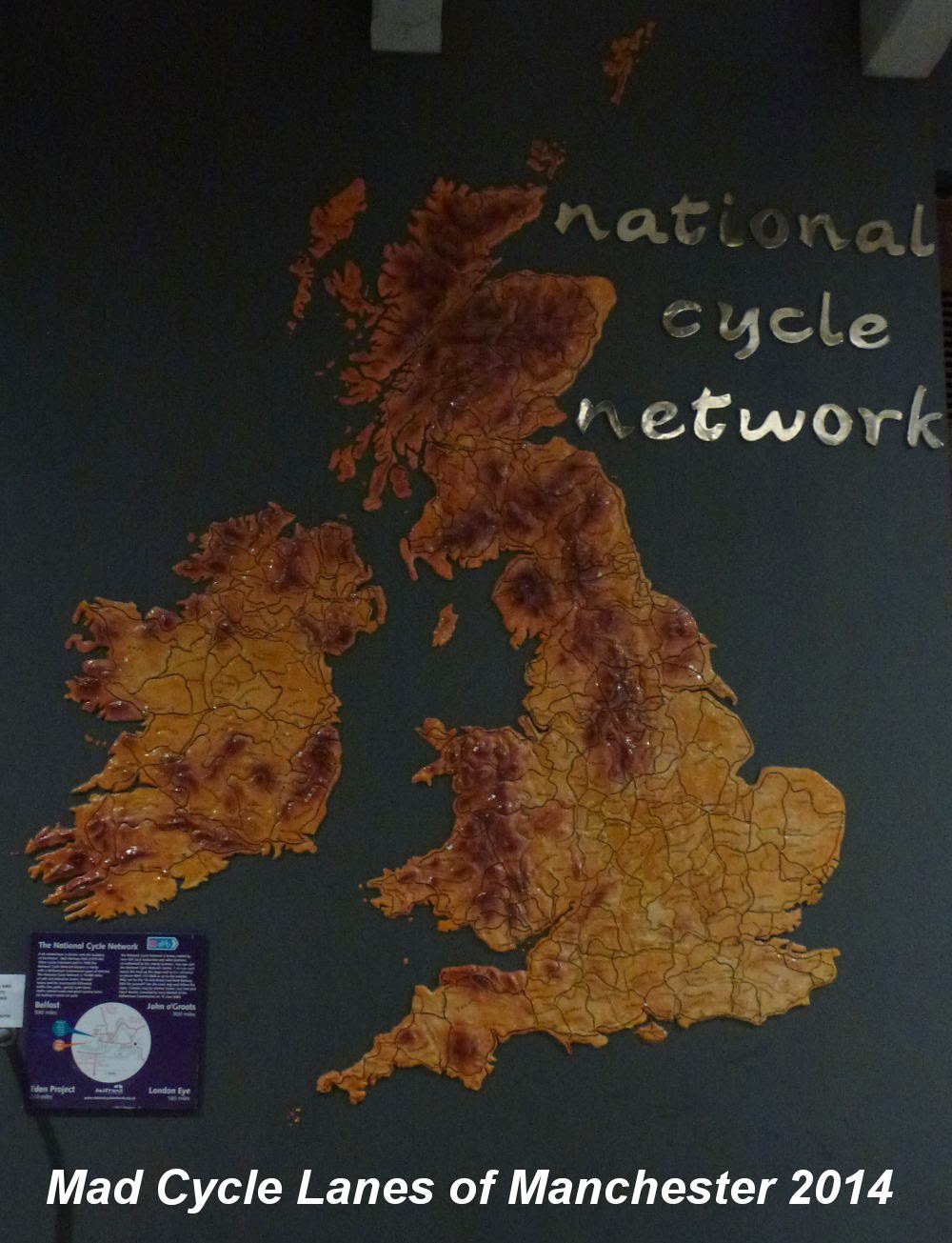 and there is a vibrant cycling culture that just keeps growing. 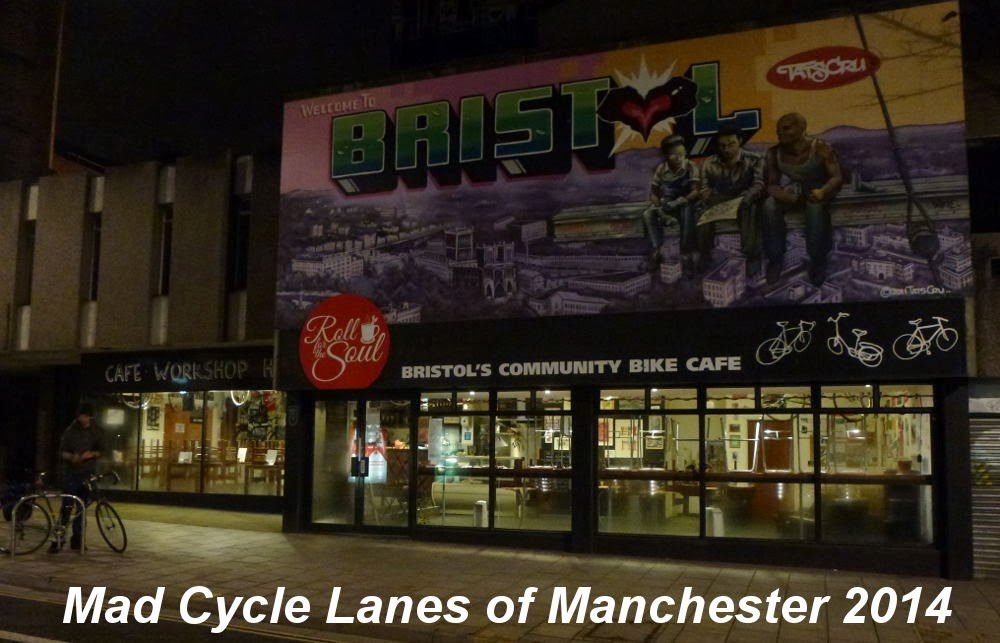 I don’t think there is any one measure that you can point at and say that it is the reason for cycling being more popular in Bristol than in Manchester. Bristol has many very steep hills, yet this seems to be no barrier. By contrast much of Manchester is fairly flat.

I think some of it is down to the energy of may different people in Bristol over many years. From the people in the Bristol Civic Society who prevented the docks being concreted over in the late 1960s to the forming of Cyclebag (Channel Your Calf and Leg Energy Bicycle Action Group!) in 1977, who began building the Bristol to Bath Railway Path and then the formation of Sustrans, to the more recent foundation of the rather more radical Bristol Cycling Campaign in 1991 which brought together a group of people, including me, who were prepared to push much harder for change and target the damaging effects of motor traffic on our lives. 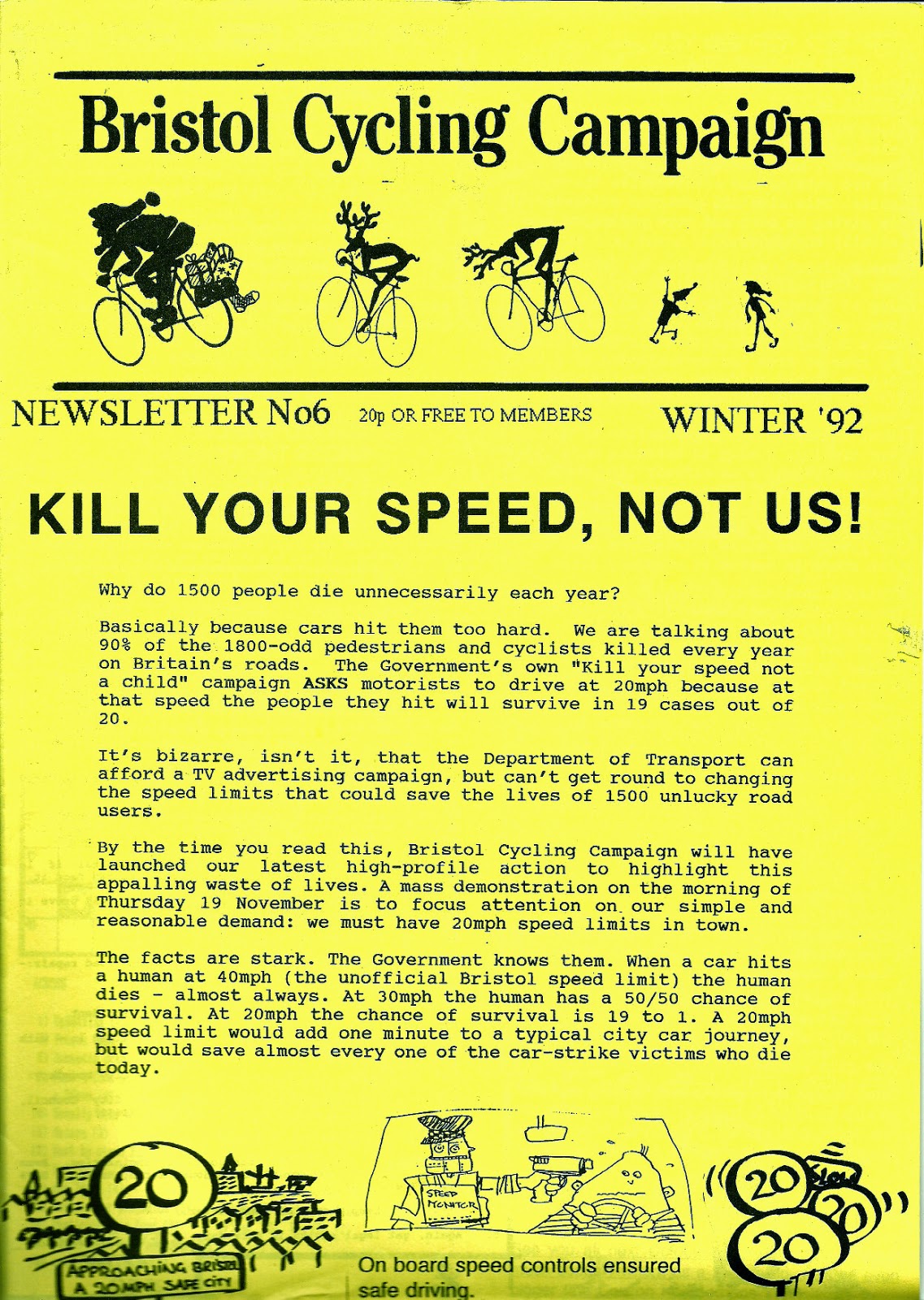 I left Bristol in 1999, and things have continued to change for the better in Bristol. Levels of cycling have grown steadily despite all the problems with the Bristol cycling city project where money was spent badly, but out of that has grown the Bristol Cycling Festival and many other home spun projects that have become very successful.

It is, in my mind, Bristol’s radical and vibrant cycling culture which has created the conditions for the city’s cycling success over the past 30 years and created the conditions where policy can shift from wasting money on roads to reducing road traffic and encouraging walking, cycling and giving the streets back to people.. 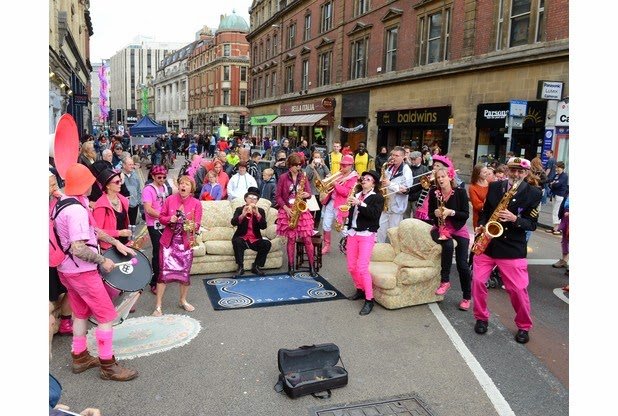 Many thanks to Mad Cycle Lanes of Manchester for letting us reprint this.