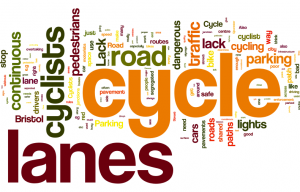 We have had over 600 responses to our survey on what people think about cycling in Bristol.

Most responses were from those who cycle regularly, 73% cycle more than 3 times a week, and the main motivations were for excecise and pleasure, commuting, and concern for environment

There is strong support for removing motor traffic from shopping areas to create ‘Living Hearts’. and 3 out of 4 saya there’s not enough secure cycle parking. People want police to priortise cycle theft.

in 20mph local areas half support further traffic slowing measures, but others feel these don’t help cycling and cause other problems. Removing though traffic and favouring residents is popular.

In 30mph areas a whopping 85%+ want PROTECTED cycle lanes and separate cyclelanes around roundabouts and major junctions, with over 70% wanting priority to pedestrians and cyclists at junctions.

In general there is strong support for the 6 main asks behind our Space for Cycling campaign. We’re launching the 2016 phase in March ready for the May elections.

Details of what needs doing is clearly set out in these Three guides to Space for Cycling.

Here are some of the things people said: