If Chris Grayling had doored a cyclist in Bristol? 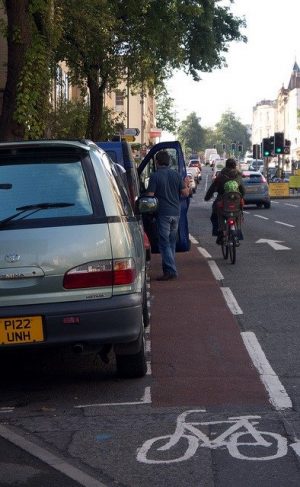 In some areas of Bristol up to 20% of collisions injuring cyclists are caused by motorists recklessly opening car, van etc. doors. In the last six years the police have recorded 139 cyclists being injured in this way – and 18 of them seriously (defined as requiring a stay in hospital (note 1)). Due to under-reporting these figures are likely to underestimate the extent of the problem (note 2). Injuries from this type of incident are caused not only by impact with the vehicle but also, and often in the more serious and fatal cases, when the cyclist is knocked into the carriageway and the path of other motorists.

Safe cycling organisations recommend keeping out “a door and a bit more” away from parked cars, but there are situations where this is difficult, or cyclists feel intimidated, say by fast moving traffic, into keeping close to the side of the road. Some cycle lanes even encourage cyclists to cycle through the door zone and danger, most notoriously outside the BRI hospital.

Note that a number of the injuries were caused by car passengers opening nearside doors to hop out of cars which had paused in congetion.

Whether carried out by a driver or a passenger, it is an offence under section 42 of the  Road Traffic Act 1988 to open “any door of a vehicle on a road so as to injure or endanger any person”. Would that include Minister for Transport Chris Grayling?

So what are the police doing to deal with these crimes? Figures obtained by Bristol Cycling under Freedom of Information requests show that in these 139 reported incidents of injury caused to cyclists by motorists, the police brought prosecutions in only 11 cases (9 of them successfully (note 3)). Given the police’s generally low rate of prosecutions for road traffic incidents involving pedestrians and cyclists, and given the recent finding that for the CPS even fatal road traffic incidents “no longer enjoy the priority they had in earlier years”(note 4), these figures are perhaps not surprising. However it must be of considerable concern to most cyclists that so many are being injured with so little being done about it.