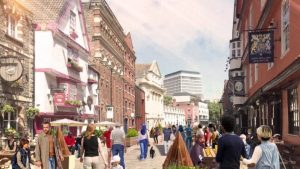 One of Bristol’s most historic streets has been pedestrianised after a campaign by local businesses. Tom Swithinbank of Bristol Cycling Campaign finds out how the businesses of King Street helped to make it happen.

It’s the home of the Old Vic and some of Bristol’s best-loved pubs, bars and restaurants. Now, after years of campaigning, cars no longer rumble over the cobbles of historic King Street in Bristol’s old town.

It has taken six years of lobbying and considerable effort by local businesses to get to this point, not least by LDA Design who created the plans. But the coronavirus pandemic has brought the needs of businesses into sharp focus, giving the final push needed to making pedestrianisation happen.

Bruce Gray, owner of Small Bar told Bristol24/7: “It may well turn out that the pedestrianisation of King Street is [Covid-19’s] longest lasting and greatest impacting legacy … The closing of the street to traffic will allow us to maximise the summer months’ trade and I hope to find our way to more secure times.”

The pandemic may have been a catalyst for change but getting to this point has taken a lot of work. Gray said: “Thanks should go to LDA Design on King Street for all their plans and visual works, all the businesses on King Street who have collectively came together to put forward a cohesive plan and to the councillors, police and highways department for their understanding and motivation to see this through so quickly.”

Mayor Marvin Rees tweeted that: “It’s empowering to receive good ideas and constructive solutions from positive people. Helps the whole process move faster. Glad we’ve been able to work together to progress this.”

It goes to show that campaigns like this can be effective in encouraging local authorities to create more traffic-free spaces.

Tom Swithinbank talks to Jemma Hall, senior consultant at LDA Design on King Street, to find out more about the collaboration

How long has the King Street campaign been going?

Jemma: The local businesses had been talking about it for about six years but there hadn’t been much traction on it. With Covid, the bars and restaurants needed outdoor space to be able to safely reopen so that brought it back to the forefront and the council have been brilliant at reacting quickly to our asks.

Why hadn’t there been much traction before, it seems so logical that King Street would benefit from pedestrianisation?

Jemma: It’s true that it seems an obvious candidate for pedestrianisation– in fact, when I tell people about it, they often say they thought the whole of King Street already was pedestrianised.

The planning system can feel quite complicated and difficult to navigate. Our involvement helped because as landscape architects and urban designers we’ve worked on other projects like this in London and around the country. Bringing our skills into the mix meant that we could produce a plan to talk over and test the ideas.

The pedestrianisation is currently temporary, what’s the long-term plan for the space?

Jemma: Right now, there’s some red and white barriers at the ends of the street. In the long term, everybody’s aspiration is for much more than that because of the historical importance of the street and its character. It is a great space, it is wider than some people imagine so there are a lot of opportunities; the idea is to use high quality materials, we’d like to see a lot more plants and greenery. One of the businesses on the street runs an oak timber framing business and they are keen to help with oak planters and sculptures. But for now, the next stage is to observe the street over the summer to understand how it is used and then there will be a consultation process. This is a perfect opportunity to see how the space is used.

Jemma: There’s actually a mixture of businesses on the street, including quite a few offices and a children’s nursery where parents drop off their kids. In fact, our perception was that there might be a lot of deliveries that happen on the street but we discovered that quite a lot of those happen round the back on Little King Street. There are also drop-offs at the theatre to take into consideration so there’s space allowed for that at the end of the street.

It must be great to have a great Bristol institution like the Old Vic involved?

Jemma: Yes, they have been very keen to do more performances outside, especially after they did Treasure Island in the street in 2011. We were also lucky that experienced Old Vic staff painted the concrete bollards so there has been that level of artistic involvement.

Were there any disagreements between the businesses during the campaign?

Jemma: One issue has been the location of the four-metre wide route through the street and whether it is located centrally down the middle kerb to kerb or building to building or based on business uses. That affects how much space each business gets in the street. The Old Vic, for instance, would want a lot of outdoor performance space. Offices might not necessarily need outside space but is it fair not to give them any? So there’s been a lot of discussion about that.

Have you got advice for other groups of businesses that want to bring about this kind of change?

Jemma: Bringing together a collective of people that are passionate about their street is really key. It’s also important to get people involved that can help, as we did with BID (Bristol City Centre Business Improvement District). We also had ex-mayor George Ferguson helping, as he is passionate about the street.

Different people from the range of businesses had skills, ideas and contacts too; knowledge of licencing, artistic design, the practical design of the street – I think this is really important, don’t be afraid to ask for help!

I’d say it’s worth keeping the plan as simple as possible so that it gets off the ground. Incremental change is a good approach so you can test things out. Covid has enabled more experimentation and there has been an attitude of “let’s try this out”. It may not work but that’s fine – we can see how spaces are used and then design a long term approach that meets everyone’s needs.