Is cycling a mode of transport? Our thoughts on WECA’s Transport Delivery Plan 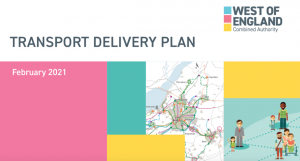 At Bristol Cycling Campaign, we were interested to review the West of England Combined Authority’s (WECA) Transport Delivery Plan (published Feb’21 – see link). The document claims to set out “the currently funded transport projects (2021 – 2026) that are progressing to delivery over the next 5 years in the West of England region.”

We were excited to see that it would offer “clarity to the public, stakeholders and investors about projects they can expect to see delivered over the period.” And further, that it acknowledged that the “transport sector at 32%, is the largest single source of carbon emissions in the South West” and a key goal was to deliver “practical and realistic alternative to using the car.” As part of its plan to “net zero carbon by 2030.”

Then we read the document and realised that like with almost everything else we’ve seen from WECA its full of fine words & hot air about active travel (cycling & walking), but completely lacking in substantive detail about the delivery of projects to achieve the modal shift required to reach nett zero by 2030.  It confirms our suspicions that, as WECA doesn’t really consider cycling to be a mode of transport, then there is no reason for them to have a transport delivery plan for cycling.

This document is published in spite of Bristol University’s Cabot Institute for the Environment May 2020 report stating that to achieve nett zero by 2030 requires an 88% reduction in emissions in the transport sector, by a massive modal shift:

We would have expected that this would mean the key focus for WECA’s Transport Delivery Plan for the next 5 years would be on facilitating the almost doubling of active travel journeys. Especially as enabling more active travel can be achieved for a fraction of the cost of building new bus or rail routes and in significantly less time – if there was a will. But instead, we find not one single reference to cycling on the “our priorities” page and see that cycling & walking improvements are tied into “co-delivery” of bus corridors, at a time when national government has committed £2 billion to Active Travel through Gear Change (link).

Whilst we fully agree that good public transport is important, given the required modest increase (of 6%) in public transport journeys, we’d suggest this could likely be achieved by simply improving the quality & reliability of current services, coupled with integrated ticketing and lower prices.

The Transport Delivery Plan also boasts many claims about its “transformational” Mass Transit system but fails to point out that the benefits of this will not be reaped until well after the 2030 Net Zero deadline has come and gone.

We hope that the new WECA metro mayor will make his first action on  the 7th May to kick this plan out and show the vision & leadership to put cycling & walking on the agenda in our region.