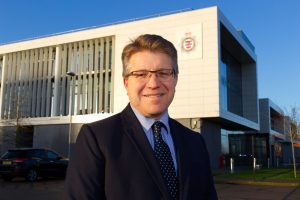 1. In Bristol in 2019 A & S Police recorded 318 incidents of injury to cyclists arising from collisions with motor vehicles. What initiatives would you like to see pursued by the police to reduce this number?

That is a shockingly high number of injuries and needs to be reduced. If elected, I have pledged to develop a Road Safety Strategy in consultation with road user groups including Bristol Road Justice to improve road safety. For cyclists, I believe that one of the most effective ways to reduce injury numbers is education of road users, especially motorists and so I would also like to see the police pursue a communications campaign aimed at educating motorists on the vulnerability of cyclists. I would also work with the City Council to improve road architecture to protect cyclists. I am a strong supporter of Operation Close Pass and would ensure this is run regularly by Avon and Somerset Police, and would also ask the police to review Operation Near Miss submissions to see if enforcement or education activity is needed.

2. Police records indicate that in the overwhelming majority of these incidents the motor vehicle driver was at fault, but in only 12% of these cases was any enforcement action undertaken e.g. warning letters sent, points awarded, education required or prosecutions initiated. How would you envisage ensuring that all incidents of careless or dangerous driving are thoroughly investigated and appropriate enforcement action taken?

Investigations of these types of road incidents is a key area which is currently under resourced. Central Government cuts to the Avon and Somerset police’s budget has meant a significant reduction in trained officer numbers over the last decade, and while numbers have started to increase again recently, rebuilding takes time. However, if elected I would prioritise investigations of road incidents involving cyclists for additional resource. For example, I would ask the police to increase the number of trained Roads Policing Officers so that investigations could be carried out in all these cases and to work closely with the Road Safety team to carry out more education and preventative work. I would regularly review the data on roads policing activity and monitor offences to ensure that appropriate action is being taken in incidents of careless or dangerous driving.

3. In relation to near misses logged online by cyclists, the police take no action other than record the incidents. In the case of video submissions of close passes and other dangerous driving submitted by cyclists, the police do investigate but do not respond with information as to what action they will take. If elected, would you ensure that all such incidents, however reported, were thoroughly investigated, appropriate action was taken and that cyclists were informed as to the outcomes.

If elected, I would ask the police to review the Near Miss submissions and see if any enforcement or education activity was appropriate. I believe that Avon and Somerset receive about 200 videos of dangerous driving submitted by cyclists per month, review them all and that approximately 90% have positive action taken, for example enforcement, education or a warning letter. There are some concerns about what data can be shared legally with those submitting the evidence but I know the police are looking at this and seeking to expand the amount of information they share. I know how important it is for public confidence of the police that victims and witnesses see positive action being taken. If elected I would ask the police to share anonymised, high level outcome updates in each case and to otherwise work to share as much information publicly as possible.

4. Data on motoring offences is not regularly shared. If elected, will you ensure that data on roads policing activity and motoring offences is published regularly, that the number of injury collisions which result in prosecution is made public and that this data is broken down by vehicle type and local authority area?

Following my recent meeting with Bristol Road Justice to discuss road safety, I updated my roads policing policy to include meeting regularly with road user groups and publishing road safety data. If elected, I will commit to publishing this information immediately and to working with the police to capture and publish any information which is not currently available. You can find further details of my road safety plans on my website: https://johnsmith4pcc.com/plans-safer-roads-all-users/.

To contact me for further questions or for more information on my campaign and priorities: