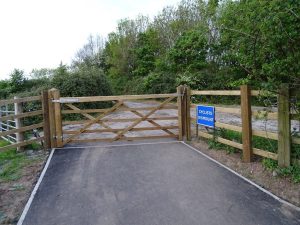 There’s a very pleasant loop now available taking you from the centre out along the Festival Way, to South Bristol Link (SBL), then back along the Malago Greenway.

At the northern (Long Ashton) end of the SBL, the cycle path is unfinished. The link to the Festival Way is across a bridge over the Long Ashton bypass (A370).  The pavement cycleway from the SBL leads directly to the bridge but the short section from the Festival Way over the bridge and beyond has had no work done on it and has a very bad surface. A person on a bike also has to negotiate two farm gates. Both are large and heavy and impediments to all abilities cycling. The route is also not signposted, so people who did not know of it’s existence would not spot it

It appears that it’s deliberately unfinished to accommodate the landowner and encourage us to walk our bikes! We trust this is not a formal part of the status of the route as a “Community Forest Path”. This is a path encircling 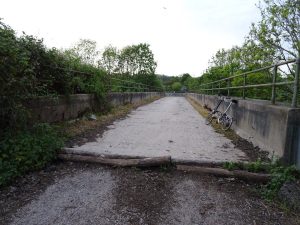 Bristol; the pedestrian equivalent of the Avon Cycleway.

Here’s the response we had from the contractor, Griffiths, reply to our enquiry:

Thanks for your enquiry. I have had feedback from a North Somerset council representative on the project management team of the link road.

The section of the route over the bridge and ramp to the gate is a public footpath not a cycle path. Cyclists are permitted to take their cycles along it.

At the time the scheme went to planning and to public inquiry the upgrading of this section from footpath to cycle path posed a large risk of challenge to the approval of the project. A decision was taken at the time to tackle this at some future date.

The bridge is also a farm access for cattle so the condition of this section will always be muddy.

This section of the route is considered to be suitable as a footpath. The use of this route by cyclists is a sensitive issue with the landowners and as cyclists are supposed to walk this 60m section the council do not intend to upgrade the condition of the ramp at this time.  They would upgrade the surface if we successfully upgrade the route to a cycle path from a footpath.

There is a cycle way link from the SBL to the park and ride via our bus link which will be open later this year when the Metrobus scheme completes. This would provide an alternative route towards Long Ashton.

As contractor we are yet to install the cycle signage as part of a programme of works as work is still on going on the SBL.

The gates are required to segregate cattle from cyclists. The two gates are required as part of the land agreement for the route. These gates need adjusting such that they are self-closing and have a more friendly latch. NSC are also looking at the design of the gates on the bridge adjacent to Festival Way to make these more cycle friendly.

North Somerset Council will monitor the numbers and interaction of cyclists and farm users, cows, to assist in gaining information to support the use of this section as a cycle path with a view to future upgrading.

The council appreciate that this section is not ideal from a cycling viewpoint however we need to take into account the existing users of the bridge. It does provide a new route for cyclists and the gates are not considered a significant delay compared to use of other routes.

* Let’s not talk about the other missing link at the other end, from Cater Business Park to Crox Bottom on the pavement by Hengrove Way…