Threat to walking and cycling on Prince Street Bridge 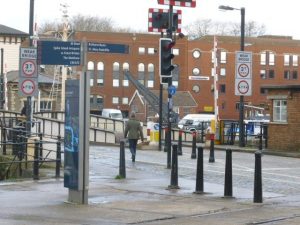 Worrying news from cabinet papers published yesterday that Prince Street Bridge, and the streets on either side, may become as congested and hostile for walking and cycling as before (which is to say ‘business as usual’ and a missed opportunity).

It is our view that this should be closed to motor vehicles so that two new iconic ‘plazas’, one at each end, can be established at the heart of the Harbouride (A Modest Proposal #3: Inner Loop Proposal). It’s plain to see that the level of use for walking and cycling, and the importance of the public space, mean that through traffic can no longer be accommodated.

The bridge has been closed for repairs since August 2015 and it’s been found the condition is worse than thought. An option was considered to “refurbish the existing bridge with a lighter deck only suitable for pedestrians and cyclists, [although] the potential cost saving is small as a percentage of the overall estimated cost of the work and [it] represents a good investment in network resilience”.

The decision has been made to return the bridge to its previous carrying capacity although the report says “this does not preclude a future policy decision on what traffic the bridge may carry if overall traffic conditions in the City were to change”.

The report says that “Prince Street Bridge forms a vital link enabling pedestrians and cyclists to cross the City Docks.”

No argument about that.

It goes on to say “It is also an important route for light vehicular traffic and the consequences of the bridge not being available for such traffic can be felt in several locations on the highway network”.  The level of use is apparently “6,000 pedestrians and 2,500 cyclists wishing to cross the City Docks at this location, along with well over 4,000 vehicles each day”.

It seems almost unbelievable that there are so many more vehicle movements each day than cyclists.

With Bristol aiming for 20% of trips to work by bike in 5 years that certainly won’t be the case for long. The very useful (if rather idiosyncratic) National Propensity To Cycle Tool shows that at the 2011 census there were estimated to be 693 trips to work on Prince St, but that with ‘Go Dutch’ levels of commuting this would be 3965.

The point is that the same bleating arguments against reclaiming our streets and public spaces for people rather than cars were made against removing the dual carriageways through Queeen Square and College Green. Who now would want to bring them back?

When are we going to see real transforming leadership at a time when we have ‘smogsmobile’ because air pollution is killing 200 people a year in Bristol and when Bristol needs a Living Heart?

This is why our Space for Cycling campaign is so important. We need those with the political will to make the necessary changes.