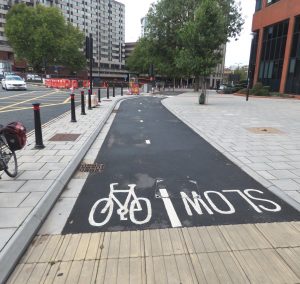 Bristol Cycling Campaign calls on the West of England Combined Authority (WECA) to provide additional funding for walking and cycling.

We understand that central government have allocated the first tranche of the £250m funding for walking and cycling in the COVID19 recovery, first announced on 9th May 2020. Of the £45m in this first wave, just £741,000 has been made available to the WECA region, as the allocation was based on levels of public transport usage in each region.

To ensure effective measures can be implemented in Bristol and the surrounding areas, we are calling on WECA to reallocate some of its own funds and match the amount being provided by the government. This could come from within the Transforming Cities Fund, of which WECA have apportioned a much lower amount to active travel than other authorities.

The guidance provided with this funding contains strict measures to ensure meaningful impacts and quick delivery. These measures include:

This will enable local authorities to implement schemes already planned in Local Cycling and Walking Infrastructure Plans (LCWIPs). The WECA LCWIP is due to be formally adopted on 19th June.

We strongly support this guidance to ensure the implemented measures have a significant positive impact on the walking and cycling network of our city. As proposed in our webinar of 21 May 2020, we remain available to work constructively with the local authority to prioritise interventions based on community needs and to ensure a high quality of delivery by carefully reviewing technical proposals.

Bristol City Council and WECA have received our detailed response to the LCWIP, which they are welcome to use to assist in designing schemes to the requisite standard.