Why the Dutch Cycle, and what Bristol can learn 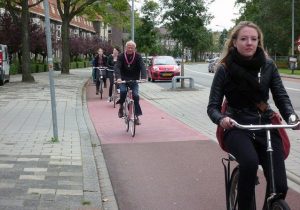 “The course has been a brilliant overview of the complex factors that influence cycling rates around the world. I can highly recommend it to advocates and professionals that want to expand their knowledge base. The course consists of five hours a week for five weeks, if you can commit this time, I very much recommend looking into the course. I wanted to share my final essay with the Cycle Campaign as I hope my thoughts will resonate with many of our supporters.”

The two questions posed at the end are really interesting for Bristol. What do you think?

By way of short film tasters have a look at The Netherlands Megamix Bike Montage (which may make you very happy, and frustrated at the same time), and of course How the Dutch got their cycle paths. These are from the excellent Streetfilms.org collection who have just done one on Coronavirus Has Changed Our Streets And We Need To Heed Those Lessons.

The success of cycling in the Netherlands is down to more than just infrastructure – the Dutch have encouraged people from all demographics to cycle. How can advocates in the UK learn from this as we push for more infrastructure?

Over the past few years, I have been strongly of the opinion that the infrastructure is key to increasing the popularity of cycling and that discussions around culture were little more than a distraction from the topic. However, as a result of this course, together with other experiences, this viewpoint has shifted somewhat.  I now have a much better understanding of how culture influences cycling and how Dutch culture has significantly shaped the popularity of cycling.

It is clear that if we want a twofold increase in cycling in the UK – something that seems achievable, especially for commuter cycling – then infrastructure is going to be essential and that this increase cannot be achieved simply by ‘encouraging’ people to cycle, we need to ‘enable’ people to cycle. However, I have learnt from this course that the culture and particularly the messaging within a country or even a town or city can play an instrumental role in shaping the way people request the cycling infrastructure we need.

Looking back to the 1960s and the Dutch ‘Stop de Kindermoord’ campaign, there was a clear focus on the decline in safety for children on bikes. However, it also placed particular emphasis on the importance of childhood freedom and the space that was being taken away from children by the increase in provision for the car.  In the UK we have a tendency to campaign for infrastructure based on safety but with less emphasis on the safety of children and the freedoms that our children could have if we designed our cities differently. This is the key shift that is needed in the UK – not just cycle infrastructure for current ‘cyclists’, but infrastructure for future generations to cycle if they want to.

“I was very worried by the changes that took place in society – it affected our lives. The streets no longer belonged to the people who lived there, but to huge traffic flows. That made me very angry.” Maartje van Putten, the first president of ‘Stop de Kindermoord’ (How Amsterdam became the bicycle capital of the world, Guardian, 2015).

One of the most important and impressive aspects of cycling in the Netherlands is that it is seen to be accessible (and acceptable) for all. Many of the respondents in the course discussion threads pointed to the fact that in their country cycling is seen as a sport and is mainly enjoyed by white, middle class men. In the UK, the newspapers hold a powerful influence on public opinion with many right-wing newspapers demonising cycling and creating a negative impression of ‘cyclists’

It is noted that the term ‘cyclists’ has been so badly damaged in the UK that some advocates no longer refer to ‘cyclists’; rather “people that ride a bike”.

Bristol Bike Life found that 18% of people in groups D and E felt that ‘cycling wasn’t for people like them’, compared to just 8% of those from groups A and B. (Bike Life Bristol 2019 report finds safety is the single largest barrier to more people cycling)

This course has taught me that a number of aspects of Dutch culture are important in encouraging the sense of ‘cycling for everyone’. In the film, ‘Why We Cycle’, the Dutch egalitarian culture was highlighted; people are seen as equals and it is not part of Dutch culture to show off one’s wealth. This is something we can aspire to for many reasons in the UK but when considering cycling culture, I think this helps to show that advocates must emphasise that cycling is a mode of transport for all and that the quality of your bike or equipment is not important.

It also transpired from the course that leading figures such as the Dutch Prime Minister and the Dutch Royal Family are considered to be good role models; regularly using bikes as a mode of transport themselves. Significantly, many of the answers in the discussion forum pointed to Chris Boardman as the primary UK role model – he is the Cycling and Walking Commissioner for Manchester but seems to have inadvertently become the Commissioner for the whole of the UK! As much as I value his skills and manner, this shows how the UK is lacking when it comes to role models. That said, there is some evidence of role models within local areas and individual organisations: I recently attended a talk by a large business in Bristol where a female director has taken the lead on cycling and has renamed their car park the cycle park – small changes but positive steps to reinforce the message that cycling is encouraged.

In Bristol, the recent Bristol Bike Life Survey found that only 9% of residents from socioeconomic groups D and E cycle once week, this is a major contrast to the 37% from groups A and B that cycle once a week.

There is a feeling here in Bristol that the current administration believes that people from certain backgrounds and demographics simply won’t cycle and that improving cycling facilities will make it more difficult for our lowest income residents to drive. The evidence on social justice paints a different picture; 40% of residents in socioeconomic groups D and E do not own a car and are more likely to have good access to public transport and local amenities.

This is a significant battle we need to overcome in our work, social injustice is seemingly overlooked as a key aspect of advocating space for cycling. For example – Bike Life Bristol found that 79,000 people from areas that are among the 20% most deprived in England could cycle to the centre of Bristol in just 25 minutes but it needs to be safe enough to enable this.

How is the decline of national habitus related to social inequality? Distance between social classes appears to be on the increase, and in many European countries, social mobility is declining. To what extent do more diverse patterns of transfer, more informal and egalitarian norms, and diminishing influence of the nation-state affect social stratification? Does this affect inequality?  (The rise and decline of national habitus: Dutch cycling culture and the shaping of national similarity. Giselinde Kuipers , 2012)c

Evidence suggests that people in groups D and E and those from BAME backgrounds in cities such as Bristol lack appropriate role models, so campaigners need to work with community groups to inspire them. Bristol Cycling Campaign recognise this situation and are working to combat it. A small part of this is the launch of an Instagram project intended to show that cycling is a normal, everyday, activity and a valid and positive way to travel around the city; not just a leisure activity for the ‘Lycra brigade’. You could argue that we are promoting the message that we want the quantity of bikes to increase while the quality (and value) of bikes decreases!

“Between 1900 – 1918, bikes became more heavily accessorized for intensive daily use with brakes, front and back racks, as well as sturdy stands for short stops and quick deliveries. This bicycle was a workhorse rather than a fancy touring machine.” (Contested Spaces: Bicycle Lanes in Urban Europe, Oldenziel, R. & de la Bruhèze, A. A, 2011)

There are, however, notes of caution from the course; reading states that Dutch immigrants are less likely to cycle and in some cities cycling is still seen as a middle class activity designed to ‘attract the creatives’. As I ask below, it would be interesting to hear more about the Dutch experience of this situation.

In a striking contrast with usual patterns in 20th century Europe and in swiftly developing nations like China, the well off cycle, whereas the less well off, both native Dutch and immigrants and their descendants, take the car (or the scooter). (The rise and decline of national habitus: Dutch cycling culture and the shaping of national similarity. Giselinde Kuipers, 2012)

Due in part to the negative perception of cycling in the UK, we are also turning our focus away from ‘cycling’ and onto campaigning for a cleaner, fairer, healthier city, with cycling being a significant means of achieving this. As we move through 2020 we are likely to place a lot more emphasis on Low Traffic Neighbourhoods and less on cycling commuter routes. We want to move the debate away from ‘cycling’ onto clean air, children’s play, childhood independence, social equality and the health of our city.

This course has taught me the importance of culture in shaping people’s perception of cycling and cycle advocates must use this knowledge to get public support in order to persuade politicians to bring the changes we want and the evidence says we need.

In addition to the learning from this course I would like to explore the following topics further: