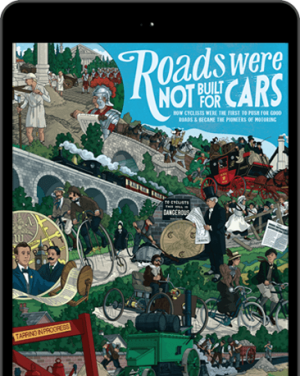 Carlton Reid, well known on-line as an advocate and historian for cycling, was in a cheerful mood last night. The first edition of his large and handsome book “The Roads Were Not Built for Cars” is as good as sold out and an expanded second edition is due in the Spring.

Carlton tells a good story. We enjoyed pictures and tales of all the surprising links between the development of the bicycle and the development of the motor car. A major share of all motor vehicle achievements and innovations (including Champion spark plugs) seem to have been pioneered by champion cyclists. Even The “Daily Mail” was an offshoot of the more respectable “The Cyclist” whose style and contents were developed by its brash young deputy editor William Harmsworth.

As Bristolians we were proud to learn that half-decent road surfaces were first produced by the Bristol-employed engineer John Loudon Macadam who found a way of surfacing what would have been muddy tracks with finely graded chippings set on a cambered stone surface. The addition of tar to a “macadamised” surface by later engineers made the Bristol and Bath Cycle Path what it is today. (John Grimshaw was in the audience).

In the lively Q&A that followed Carlton mentioned (amongst other things) the value of finding motoring-friendly people to advocate cycle-related issues. He gave the example of new driving instruction videos being made by Blaine Walsh, where Carlton had been able to give input from a cycling perspective.

Carlton’s book can be browsed at http://www.roadswerenotbuiltforcars.com/

As news was about to break of more cash to spread tarmac for cycling in Bristol, we were also given a useful presentation on Green Capital 2015 by Mark Leach, Project Manager of Green Capital for Bristol City Council. He told us that a European Green Capital as an idea had first been mooted in Bristol and that it had been a City ambition to win the title since 2006. 800 partners were now involved, and plans for what would be happening were developing rapidly. Copenhagen (last year’s Green Capital)had passed on their experience of printing a programme for the year ahead only to find it rapidly proving inadequate to the number of events that cropped up as the year went on. Anyone wanting to know all that will be happening needs to go on-line and see plans as they mature.

Twelve subject groups, including a transport group, have been established but it seems that Bristol City Council do not have an officer on this group. Councillor Charlie Bolton was in attendance and seemed to note the fact. Much more on Green Capital is at http://bristolgreencapital.org

More about a packed meeting on the live blog entry.