Act now to improve the A38 south from Bristol 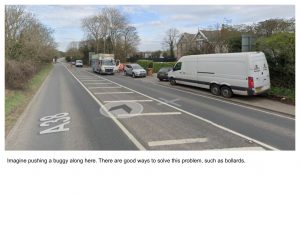 As you cycle south out of Bristol are there any routes that you would be comfortable taking a child on? If you needed to commute to a job at the airport, could you walk or cycle? Have you cycled to the beautiful countryside around Rowberrow, Blagdon or Cheddar? The A38 could be a really valuable walking and cycling route, but at the moment it is dangerous. I found myself cycling on the road while lost a few months ago but decided to get off and walk because it felt so unsafe. I was lucky to be able to walk at all, large sections of the road don’t have any footpath, even though it is usually a wide road with hatching down the middle. Fortunately there’s a consultation from Somerset Councils about the A38 live now, so you have a chance to suggest improvements.

“Without a pavement I have to drive to the shop… even though it is within walking distance if there was a usable footpath”.

The consultation covers the road all the way from the outskirts of Bristol to the Edithmead roundabout, near the Severn Estuary. Some of the existing comments show how poor it is at the moment for pedestrians and cyclists, which is a shame because there’s so much potential in this route. The A38 includes a crossing of the Strawberry line and the Avon cycleway. It also has the potential to link towards other routes like the South Bristol link road and Festival Way. However the proposals as they are extremely weak.

There are some improvements to walking and cycling infrastructure planned, especially around Bristol Airport, but the proposals for active travel lack ambition and create disjointed, almost unusable, paths rather than functional networks. For example, in Langford there is a plan for a shared use path but it doesn’t link to any other infrastructure so it is only useful for cyclists who are residents of Langford or those willing to use main roads to get there. Similarly there is a plan to add 2 sections of shared use path between Bristol and Bristol Airport, but these don’t connect to each other, or any other infrastructure.

There are other problems with the current proposals, for example there is no plan to stop paths being used as parking spaces. It’s clear from comments on the proposals that this is already a problem, and is likely to get worse if they widen paths. 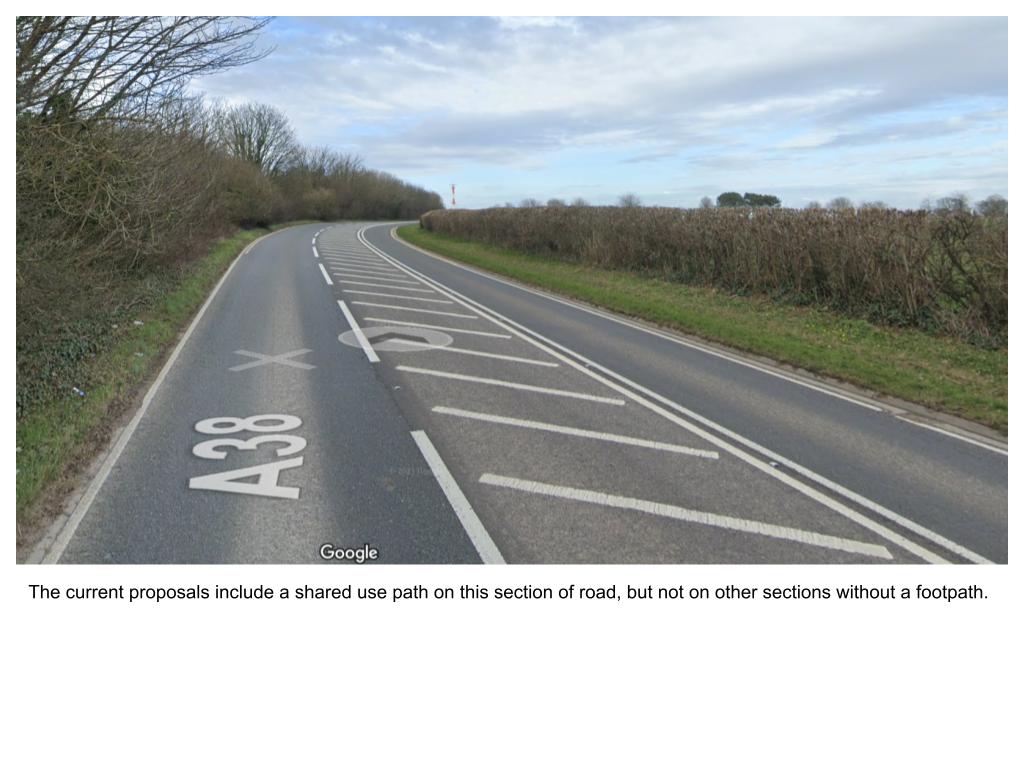 Why have the Somerset councils created such a poor set of proposals? It seems that they want to increase motor vehicle capacity on this road, but in order to receive funding from Central Government they need a fig leaf of active travel improvements. Both Somerset and North Somerset councils have recently declared a climate emergency so their behaviour is disappointing, if not particularly surprising.

But why should we bother replying to this consultation from these regressive councils? The answer is that it is an opportunity to reply on the behalf of vulnerable road users. I recently saw two teenage boys on mountain bikes cycling up the hill through the village of Dolberrow with traffic encouraged to pass extremely close to them. The only good way to protect them and other cyclists is for the A38 to have walking and cycling infrastructure all the way along and this consultation is a great opportunity to ask for this.

I’m sure there are lots of other issues with the road that Bristol cyclists like you would be able to advise on, so it’s very important that you reply to the consultation. I will be asking for the shared use path that is proposed to be continuous rather than stopping and starting. Please complete the consultation before it closes this Sunday (1st August) and explain your needs or join me in asking for a continuous path.