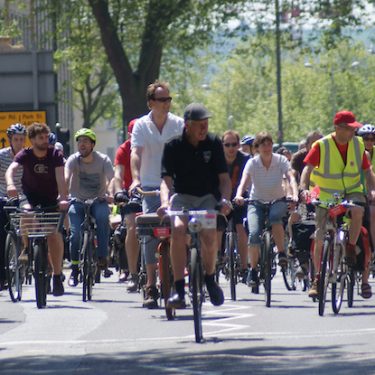 Whenever you or anyone else gets on a bike, you become part of the solution. Even if we’re just nipping to the shops or getting to work quickly. Sometimes it’s great to join with others as part of the change. That’s why Bristol Cycling Campaign has thousands of supporters, and why we support the monthly Critical Mass rides.

This month the ride is a week early, on Friday 20th Sept, in order to support and be part of the youth lead Climate Strike day.  Some will be joining the #GeneralStrikeForClimate on College Green from 11pm, but we’re particularly encouraging anyone with a bike to join the Climate Strike Critical Mass at 6pm, hosted by Extinction Rebellion Bristol and Critical Mass Bristol

As the writer H. G. Wells said “Every time I see an adult on a bicycle, I no longer despair for the future of the human race.”