Research on driverless vehicles – how will they affect cycling? 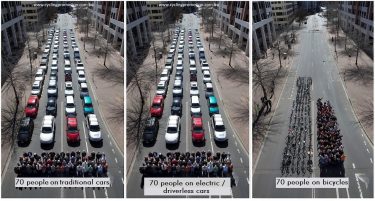 We’ve been asked to share a survey from the Centre for Transport and Society at UWE about public attitudes to driverless vehicles. Researcher Dr Miriam Ricci (@RicciMiriam) wants to ensure that the cyclist’s perspective is represented in focus groups.  She says:

“Please help us find people from all walks of life to take part in informal discussions (‘focus groups’) on driverless vehicles. These will be held in Bristol at the end of March/beginning of April. If people want to take part, first they need to apply by clicking on the following link: https://uwe.onlinesurveys.ac.uk/driverless-vehicle-focus-group-application-form-final”

There’s lots in the news at the moment including Nissan driverless cars, close overtakes and cyclists. The Guardian reports that Uber admits to self-driving car ‘problem’ in bike lanes as safety concerns mount with the San Francisco Bicycle Coalition warning that when the car was in “self-driving” mode it was observed twice making an “unsafe right-hook-style turn through a bike lane”.

The European Cyclists’ Federation says that we need to Watch out for laws that demand cyclists get out of the way of driverless cars (a good overview article from Carlton Reid). The Financial Times says Driverless cars pose threat to growth of cycling in cities, with ex London Cycling Czar Andrew Gillingham saying “the only way to accommodate both cyclists and cars happily in such a future would be to take space away from vehicles and give it to bikes”. On the other hand, in the same article Professor of transport engineering at the University of the West of England, John Parkin, thinks that much of the infrastructure that’s being implemented to keep bikes and cars apart in inner-city environments, will be made redundant by autonomous technology reaching maturity.

Yet another view is that self-stopping autonomous vehicles will open the door for cyclists to seriously slow down busy urban traffic, as “Once people realise that an autonomous vehicle will stop [automatically], will pedestrians and cyclists deliberately take advantage and step out or cycle in front of them?”

What do you think? Comment below, or on our Forums.