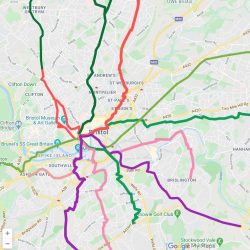 A lot of useful work has gone in to this draft strategy which follows on from the publication last year of the Bristol Cycle Strategy. As with all general plans and statements of intent they are likely to have only a slight influence on what actually happens, but they are absolutely necessary and important to get right as they make certain outcomes more likely than others.

Bristol Cycling Campaign welcomes the development of a cycling strategy for South Gloucestershire and many of the aims and aspirations expressed therein. However all good things can be made even better, so here are our comments on the documents which have been presented for consultation.

Bristol Cycling Campaign believes that everyone in Greater Bristol, whatever their age or ability, deserves safe and inviting space for cycling. This should never be to the detriment of walking. We have the following general comments on this consultation drawing on the Bristol Cycling Manifesto, and the Making Space for Cycling guide for street renewals which set out how to achieve Space for Cycling:

The strategy aims to “make cycling more attractive” and “make better places”, but this is not carried through to the rest of the strategy.  Too many of the current and proposed routes in the South Gloucestershire area are alongside and close to main roads with unpleasantly high volumes of motor traffic.  Making cycling attractive and comfortable by creating a more pleasant environment for cycling routes is important for encouraging more people to cycle.
We strongly encourage and expect a fully integrated approach with Bristol City Council in delivering a unified and seamless cycle network across the whole of Greater Bristol. This should apply to all relevant issues including design standards, signing and routes. There should be a close match between the Bristol Cycle Strategy 2015 and the final one for South Gloucestershire.
The aspirational network of cycle routes should include all those strategic and neighbourhood routes identified by Bristol Cycling Campaign as set out on the following maps South Gloucestershire North, South Gloucestershire South, South Gloucestershire Outer.

Justice for Ross and Clare Simons

A petition has been started by the sister of Clare Simons who was tragically killed with her husband Ross whilst riding their tandem last January (2013). The hit-and-run driver had eleven previous convictions for driving whilst disqualified and recieved only a relatively short sentence. The incident ocurred in Hanham and was widely reported in the media both locally and nationally. Please sign the petition and tell everyone you know to make sure this never happens again: http://justice4rossandclare.com/. The CTC also have a petition on road justice at http://www.roadjustice.org.uk/…