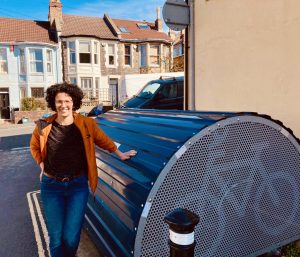 Bike hangars are a great way to provide secure bike storage but with only 15 in Bristol, there’s a long way to go to meet the growing demand. Rachel Dickinson explores the problem, and what Bristol Cycling Campaign wants to change.

How can we encourage more people to travel by bike in Bristol? One way is to address the lack of secure bike storage. Many people that would like to get a bike just don’t have anywhere to keep it at home. Lack of space and difficult access – because of steps or narrow hallways – means that many Bristolians just can’t have a bike at all.

Research by Bike Life has found that one in five people (21%) say they don’t cycle, or cycle less, because of a lack of cycle storage at home or work.

But there is a simple answer. Bike hangars provide secure, on-street bike-parking for people who don’t have any space to store a bike at home. These lockable pods take up less space than a parked car and offer space for six bikes.

Emma El-Deen Luke rents a space in a bike hangar on her street in Southville. Getting the hangar installed was not easy, however. “A few years ago, Bristol City Council was asking residents to come forward if they thought their street would benefit from having a bike hangar,” says Emma.

“I put the word out on our street Facebook group and there was a lot of interest because most people on our street don’t have room to store bikes in their houses. There’s also a lot of bike crime around here so storing bikes outside isn’t safe.”

It was up to Emma and her neighbours to get the approval of the rest of the street for the installation of the bike hangar.

“The council was nervous about how communities would react so it was up to us to knock on the doors of everyone in the street to get their support. A few people had concerns and didn’t like the idea but we explained that they only take up the space of one parked car. We shared pictures of hangars so they could see the design and highlighted that there was a lot of demand for this on our street.”

It took over two years for the cycle hangar to be installed but since then, there haven’t been any negative comments from residents.

“Almost every time I use it, I’ll be approached by a neighbour asking how they can rent a space in the hangar,” says Emma. “It’s so easy to use and it means I don’t have to drag my bike in and out of my house, scuffing the walls. It’s completely secure, I am not aware of any attempts to take bikes from it.”

Emma’s bike hangar is one of just 15 in Bristol and the waiting list for new hangars has been closed since 2019 due to lack of funding. But that’s about to change. The council has received Emergency Active Travel funding for up to 20 more hangars. It’s good news but it won’t come close to meeting demand – which local survey data indicates is likely to be in the tens of thousands.

Xanthe Clay would love to be able to use a bike hangar on her street in Cotham. Xanthe wants to buy an electric bike but she doesn’t have anywhere safe to keep it.

“I gave up my car a while ago and I usually walk everywhere but a bike would allow me to go further afield. I could get to places more quickly and it would be a great way to get more exercise. However, Bristol is quite hilly and I’m aware that if I had an ordinary bike I might not use it that much. An electric bike still offers health benefits but it also gives you a hand up the hills.”

So what is holding Xanthe back?

“Storage is a real problem. I live in a terraced house with a narrow hallway so there’s nowhere to keep the bike inside and there’s no side access to the back yard. There are steps up to my front door and steps down into the garden so trying to lift a heavy electric bike through my house would be really challenging. I’m not as young as I was and I don’t want risk injuring myself.”

Xanthe is also worried about security.

“I’ve heard anecdotal evidence that people with electric bikes are often targeted by bike thieves; these are expensive bits of kit and I don’t want to increase the chances of being broken into if I am seen taking my electric bike into my house. A secure bike hangar means you’re not inviting crime into your house. It also means I don’t have to bring a muddy bike into my hall if I’ve been out on a wet day.”

Xanthe is sure that many of her neighbours would use a bike hangar.

“Lots of the houses on my street are divided into flats so I’m sure there would be plenty of demand for a bike hangar on my street – we might need several! I know the council wants to encourage more people to cycle but we really need better infrastructure and that includes bike storage. Some people will say that bike hangars take up car parking spaces but more secure bike storage would mean many people can go from two-car households to one so there would be less parked cars.”

Nat Whittingham lives close to the centre of Bristol. There is bike storage in his building but it’s not easy for him and his neighbours to use. Nat works as a teacher, regularly commuting by bike to Kingswood and Hanham. He’s also a cycle courier.

“I use a cargo bike to deliver stuff around Bristol. It’s really heavy to carry. The communal bike storage in the basement of my building is secure and dry but it’s down a flight of stairs. I’m lucky, I’m young and fit but even so it’s really hard to lug my 30kg cargo bike up and down the stairs. I’d love to have access to a bike hangar.”

The lack of easily accessible storage space isn’t stopping Nat from cycling but he says it does have an impact on his neighbours.

“There are seven people living in my building and three of them cycle occasionally but what puts them off is having to get their bikes out of the basement. One of my neighbours is over 60 and she only uses her bike about twice a year. She has told me she’d love to use it to get to her workplace in St Philips but she needs help carrying it up and down the stairs.”

It goes to show just how important storage is for people who cycle in Bristol. “Bike storage such as hangars is the only way to get more people cycling,” says Nat. Emma El-Deen Luke agrees: “If the council wants to encourage more people to cycle and use bike hangars, they certainly need to make the installation process easier.”

To this end, Bristol Cycling Campaign has published a report proposing that Bristol City Council should install 1,000 bike hangars by May 2024. The report also suggests ways to simplify installation and cut costs by at least £1,500 per hangar. And it proposes a system for the council to reach out to offer hangars instead of relying on residents to apply.