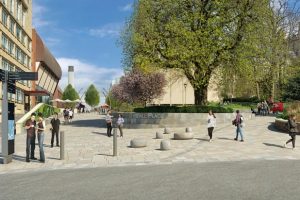 Bristol University are proposing to ‘stop up’ Tyndall Place including the junctions at either end as part of their master plan. Here’s our view.

Our overall position on this consultation is: Support with strong qualification

The Bristol Cycling Campaign welcomes many aspects of the proposals to redesign Tyndall Avenue as a public space which is wider, greener, and free of cars and buses. These proposals could produce significant benefits for the University and the City, in terms of well-being, in providing a clear physical focus for the University, and in drawing the public to the Royal Fort Gardens.

However our approval is subject to a major caveat. It is important that cyclists retain the use of Tyndall Avenue as of right, a right which is not subject to possible future removal by the University.  It is not enough to have a broad statement that “Cyclists will still be allowed to pass through Tyndall Avenue after it is pedestrianised” (Tyndall Avenue Public Realm Project Consultation Document p.8).

The proposal is to reroute cars and buses from Tyndall Avenue into St Michael’s Park Road, parallel and immediately to the north of Tyndall Avenue.  Rerouting cyclists is not apparently the intention, despite the use of the phrase “pedestrianisation of Tyndall Avenue’, but it is difficult to forecast what might happen in future.

Tyndall Avenue is a key access route for cyclists living in Kingsdown to the University, to the Triangle, and to Park Street. There is really no safe and convenient alternative. The roads around St Michael’s Hill are narrow, carry a significant amount of speedy vehicular through traffic, and are already rather unsafe for cyclists.  We would strongly object to anything would worsen the situation, even potentially.

We understand that the University wishes to apply for a stopping up order to the Department of Transport, using Section 247 of the Town and Country Planning Act, to give it control of Tyndall Avenue, instead of a mere Traffic Regulation Order.  This would allow the University “greater choice in the design and specification of materials, and greater control and control over the future maintenance and cleaning standards to which the project aspires” (Tyndall Avenue Public Realm Project Consultation Document p.4.).

We are strongly against this.  A stopping up order removes all public Rights of Way on Tyndall Avenue. Access to the public would only be by permission of the University.

We have no legal expertise, so cannot advise on the best solution to secure cyclists’ and pedestrians’ future rights.  Maybe Tyndall Avenue might become a bridleway. There is also the alternative of a Traffic Regulation Order. Both would protect the public against the privatization of Tyndall Avenue and ensure that in future, pedestrians and cyclists cannot be shut out. Both have advantages and disadvantages.

What cannot be contemplated in our view is an alternative which would give the University the right, at some stage in future, to shut out pedestrians who are not members of the university, and to shut out cyclists.

We would also suggest that in its Planning Application, the University put in whatever guarantees and restrictions may be necessary to ensure continued open access along Tyndall Avenue for both pedestrians and cyclists.

References
1. Bristol Cycling Campaign (BCyC)
We been campaigning since 1991 to make cycling in Bristol so easy that everyone does it. We produced the Bristol Cycling Manifesto in 2013 which set out a 12 year strategy to quadruple cycling i n the city which was been endorsed by the Mayor of Bristol and has influenced the Bristol Cycling Strategy. Our Space for Cycling 2016 manifesto won the support of 63% of the elected councillors, and the new Mayor.

2. Lots of people ride bikes in Bristol.
The 2011 census showed that cycling to work in Bristol had doubled over the past 10 years and that Bristol had significantly more cycling than any other major English city. On census day in 2011 16,211 Bristolians said that they usually cycled to work. (1 in 12 of the 104,729 who travelled to work at that time). A telephone survey for HM Government indicated that in 2012 nearly a quarter of adult Bristolians cycled at least once a month for one reason or another.

Bristol City Council data collected by observers between 2010 and 2013 show that at peak times there were over 10,000 cyclists on Bristol roads and 7% of all city traffic measured at these times were cyclists. Across the city, some routes carry 300-500 cyclists per hour and at four busy points on roads into the city cyclists constitute over a quarter of all traffic during Bristol Cycling Campaign Consultation Response peak hours.

So a majority (58%, but note that 8% appear not to have answered so the real number may be slightly higher) go to work either by walking or by bicycle, and it is not unlikely that a significant number of these pedestrians and cyclists use Tyndall Avenue, given that it is such a major route to the Triangle, to the University, to Park Street, and to the centre of town.

4. Improving and extending the Bristol cycle network is a council priority
Bristol City Council’s Cycle Strategy and the Bike Life 2015 report show how cycling benefits the city and set targets of 20% for commuting and trips to school. These incorporate the cycle network set out in our Bristol Cycling Network. All measures on these routes must include a high level of cycle provision, or at the least ‘cycle proofing’ for the future.

5. Cycling is a national priority
The Times newspaper ‘Cities Fit for Cycling’ campaign supported a parliamentary inquiry by the All Party Parliamentary Cycling Group that was published last month. It was prepared by Professor Phil Goodwin of UWE. In his forward he says: “I, like most professional transport planners, providers and researchers of my generation, have grown up thinking that cycling,
though worthy, is of small significance compared with the great questions of cars, traffic and public transport, or the universal significance of walking. […] We were wrong. The evidence demonstrates quite clearly that […] cycling is the mode of transport ‘on the cusp of greatness’”.
https://allpartycycling.files.wordpress.com/2013/04/get-britain-cycling_goodwin-report.pdf

6. More cycling is a health priority
Recently published guidelines by the National Institute of Clinical Excellence have set out how local authorities must invest in walking and cycling. In February this year the government’s chief medial officer, Dame Sally Davies said: “I think that investment in cycling to drive up physical activity might emerge as one of the ‘best buys’ in some areas.”
https://publications.nice.org.uk/walking-and-cycling-local-measures-to-promote-walking-and-cycling-as-forms-of-travel-or-recreation-ph41/recommendations