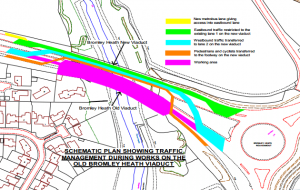 South Gloucestershire Council has secured funding via The Challenge Fund and The Cycle Ambition Fund to carry out essential maintenance works along A4174 Avon Ring Road between the A38 at Filton and the A4 at Hicks Gate. These will include improvements to the carriageway, footpaths, cycle ways and street lighting as well as structural maintenance for the Bromley Heath viaduct. The improvements aim to complement the West of England’s transport project MetroBus.

With an estimate of 500 cyclists using the viaduct daily, the project is particularly relevant for the work of Bristol Cycling Campaign as the plans involve extensive work covering the cycling infrastructure, as follows:

With the site anticipated to be under maintenance until summer 2018 and officials admitting significant delays over the duration of the works, thousands of people working in the North of Bristol and South Gloucestershire regions will be directly affected. The extent of the work requires the Southern viaduct to be completely closed to all traffic for the duration of the project; this is because the removal of the worn-out parts of the structure will mean it is too weak to safely carry any traffic until the maintenance is complete. All traffic (including cycle lanes) will be diverted on to the Northern viaduct. The crossover on this section could cause tailbacks of up to 8km and delays of up to 2 hours at peak times on the road network and putting stress on the M4 and M32.

We are encouraging all commuters regularly transiting the viaduct and living within cycling distance to reduce the frequency of car trips and consider alternative modes of transport, particularly cycling. This is a great opportunity to engage with your employer to consider how the business is committing to green travel. Why not ask for improved cycling provisions, deals, Dr. Bike sessions and support for you and all your colleagues regularly cycling to work?

At the same time, BCyC aims to scrutinise the existing plans to ensure that crossing the viaduct while the site will be under construction is safe and convenient for cyclists. Equally, we will analyse the visualisations to ensure they meet the expectations of the cycling community. Please get in touch if you want to raise an issue you experienced while transiting the viaduct on your bike.

More information can be found following the links below:

www.vimeo.com/184502794 – a useful ‘fly through’ video of the viaduct and the issues
www.southglos.gov.uk/bhviaduct – project page with the plans and latest updates
https://sites.southglos.gov.uk/newsroom/transport/bromley-heath-viaduct-maintenance-improvement-work-gets-green-light/ – press release on the works