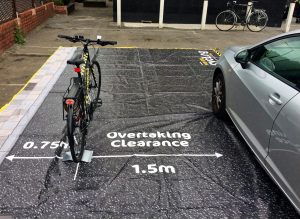 At its peak A & S had 240 roads policing officers. Following cuts they now have 55. Although many of their tasks have been streamlined and they are ‘working smarter’, this is an enormous reduction, demonstrating roads policing is not a local or national priority.

Their response to dangerous driving can be broken down into:

1. Incidents involving death or life-changing injury where investigations are handled by the specialist Collision Investigations Unit currently based at Almondsbury. In our experience, they usually carry out a professional, forensic service. Problems more often arise when cases reach court, especially with the awarding of totally inadequate sentences which fail to reflect the devastating impact dangerous driving can have on people’s lives

2. Collisions leading to less serious injuries and other reports of dangerous driving not supported by cyclists’ camera evidence where incidents are dealt with by a range of officers with variable training and experience. Our investigations reveal the police take action against drivers in less than 12% of cases. It is a major area of concern and one which generates the most cases where we are asked to assist the cyclist involved.

A & S are hoping to move to computerised incident reporting which should improve the quality of information captured and lead to a more consistent response. At present they have what they admit is quite an antiquated processing and database system

3. Close passing and other dangerous driving reports supported by cyclists’ own camera evidence where A & S have some of the best figures in the country for the number of camera uploads processed and the percentage of cases where further action is taken. The figures from A & S for the first six months of 2021 are in the link below (some reports lead to multiple actions, for example, speeding through red traffic lights). Headline figures are: 88% of camera submissions result in either a warning letter or prosecution and 73% of submissions are by cyclists. So many thanks to those who submit footage. It makes a difference!

A & S are now informing all who do send evidence whether they will be taking action. We would like them to go further and, if asked, let cyclists know whether this will involve a warning or prosecution. A & S are looking at increasing resources here as they believe camera uploads have the potential to lead to a significant improvement in driver behaviour. Local anecdotal evidence suggests that this may be beginning to happen.