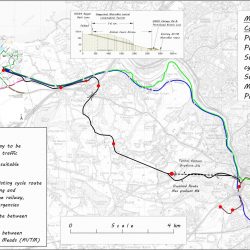 Travelling with a bike on GWR services – Christmas 2017

Bikes at Temple Meads Great Western Railway (GWR) have announced engineering works over the Christmas period. Some routes will be diverted and buses will replace some trains (the buses can carry folding bikes only). Travel to London No trains will run on the GWR network on 25 or 26 December, and on 24 and 27 December there will be no trains running between London Paddington and Slough. Some long distance trains will be diverted to London Marylebone. GWR suggest that you can also travel to London on South Western Railway from Reading,…

Restrictions on cycles on trains in Bath area this April

Two rail surveys, one local, the other a national bike-rail survey

We are strong supporters of Friends of Suburban Bristol Railways (FOSBR) and they have just launched an online rail travel survey to feed into the WEP Joint Transport Plan and inform their campaign strategy – see the FOSBR website or follow the link https://www.surveymonkey.co.uk/r/LWQBS7T The national Association of Train Operating Companies is interested in learning more about travel by cycle-rail. Here’s what they’re after: The number of cycle-rail users is growing each year and so it’s important that the Association of Train Operating Companies, understand how best to provide you with helpful information when you’re planning a rail journey…

BCyC member Alan Morris reports in from the Portishead railway line consultation exhibition… It confirms that “Our engineering work to date indicates it should be feasible to retain the short sections of cycle / pedestrian path alongside the re-opened railway under the bridges, subject to some reductions in the width of the path and provision of appropriate fencing and other safety requirements.” And there will be a “a 300 metre pedestrian and cycle promenade with lighting linking [the Portishead station] to the town centre and various footpath improvements.”…