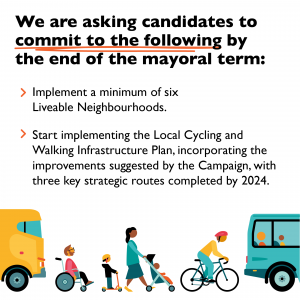 Elections: With less than one month until Bristol’s mayoral elections, Bristol Cycling is keeping active travel on the agenda. We have released a manifesto of 5 key policies that should be part of any mayor’s vision to transform active travel. Amongst other things, our manifesto would commit candidates to creating at least six liveable neighbourhoods, extending the School Streets programme, and installing 1,000 bike hangars across Bristol. You can read the full manifesto here. To book onto our Mayoral Hustings on 21st April, click here.

Cycle Hangars: Lack of secure bicycle storage space is a critical issue for Bristol, and a major reason for many people not owning a bike at all. But Bristol Cycling has an answer: bike hangars. So what’s so important about bike hangars? Bristol Cycling has been speaking to Bristolians about what having a hangar means to them. You can read the interviews here.

Brislington Tramway: Momentum is building behind plans for the Brislington Tramway. The Tramway is a missing link on the railway path that links Whitchurch, Hengrove and Brislington with the city centre. If completed, cyclists will enjoy an (almost) entirely car-free route into the centre. Bristol Cycling encourages you to show your support for the plans by commenting on the planning application.

YoBikes: The rent-a-bike scheme that has filled our city with banana yellow bikes, has pulled out of the city after four years of operation. YoBike was the first dockless bike renting scheme in the UK, paving the way for later schemes such as the Voi scooters found across Bristol today. The scheme proved mostly popular despite issues with vandalism of the bikes.

Car Free Cities: In March, climate action charity Possible launched its Car Free Cities Campaign. The campaign will run in Bristol, Birmingham, Leeds, and London, and aims to help communities reimagine how their neighbourhoods could work without car dependency. The Bristol campaign has three objectives: collect better data on traffic levels, help communities re-imagine spaces, and collect views on traffic filters. This information will be used to make recommendations for changes to policy-makers. Find out more about the campaign and how to get involved here.

Poetry: Ever wondered what would happen if you combined cycling with poetry? Well now you can find out, thanks to #BristolBikeBard. The page is the brainchild of Caroline Burrows, a poet and avid cyclist, who uses the novel combination as an escape from lockdown isolation and screen overload. Her poems celebrate Bristol as it appears through the eyes of a cyclist. You can read some of Caroline’s verses here.

Bath Clean Air Zone: Bath will experience a breath of fresh air this spring thanks to its new clean air zone. The Bath CAZ, England’s first outside London, came into effect in the centre of the city on March 15th and is part of efforts by B&NES Council to bring air pollution levels within legal limits by the end of 2021. In contrast to the proposed Bristol CAZ, Bath’s CAZ does not charge private vehicles, only commercial ones.

Road Pollution: A new study has found that road pollution is far more pervasive than previously thought, with roads exerting a ‘zone of influence’ over the vast majority of Great Britain. Geographic surveying shows that three quarters of land is no more than 527 meters from a road, resulting in ‘ubiquitously elevated’ levels of light, noise, NO2, heavy metal and particulate pollution. Only very few remote upland areas were found to be unaffected by road pollution. You can read the full report here.

Active Travel: Electric vehicles are no match for active travel when it comes to lowering emissions, with emissions per trip up to 10 times lower by bike than by electric car, according to new research carried out by the University of Oxford. Transport is one of the main sources of UK CO2 emissions, and a switch to electric vehicles simply can’t occur fast enough to meet climate goals. Instead, large numbers of people switching to active travel, even just one day a week or one journey per day can drastically reduce the UK’s transport emissions within the short timeframe we have. Read more about the research here.