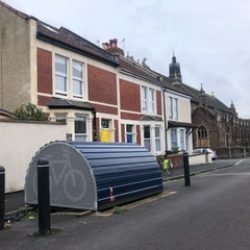 We have published a report proposing that Bristol City Council should install 1,000 bike hangars by May 2024. Bike hangars are lockable steel pods for up to six bikes and provide secure, on-street bike-parking for people who don’t have any outside space to store a bike at home. The report finds that Bristol currently only has 15 bike hangars but that local survey data show that demand for residential bike-parking spaces is likely to be in the tens of thousands. The report also proposes ways to simplify installation and cut costs by at least £1,500 per hangar. And it suggests…

Every cyclist in Bristol will have their own strategy for coping with the James Barton roundabout, one of the worst in Bristol and the subject of our Modest Proposal #5: The Bear Pit / St James Barton Roundabout. Particularly as the Gloucester Road is one of the busiest cycling routes in the city, with its own  Modest Proposal #6; Eight to Eighty cycling on Gloucester Road. Most of us make use of Jamaica Street, but it can’t be called pleasant. It also boast some of the oldest and most idiosycratic ‘cycling facilities’ in Bristol. How about this ‘Modest Proposal’… 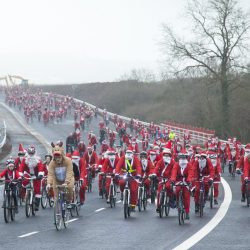 Bristol Cycling Campaign member David Neale has produced another excellent and well worked out proposal (see also the Barrow Hospital plans). This one will provide a traffic-free walking and cycling link in Ashton Vale between the AVTM maintenance/cycle track, the Long Ashton P&R and Festival Way (AVTM is the Ashton Vale to Temple Meads part of MetroBus). With the likelihood of more traffic congestion when the South Bristol Link road opens, the scheme should benefit increasing numbers of pedestrians walking between Long Ashton village and the Park & Ride. Note that it connects to… 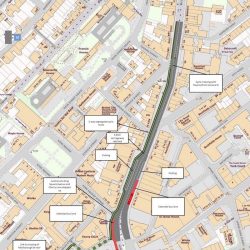 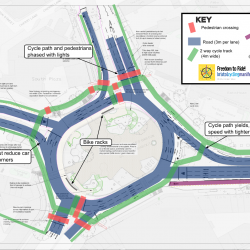 St James Barton roundabout remains among the worst in Bristol for cyclists. This is despite the sterling work of The Bearpit Improvement Group and the recently completed £1million scheme to provde a route around the inner edge of the roundabout at street level for pedestrians and cyclists. We hope this already outdated scheme will be the last time huge budgets will be spent forcing cycles to share busy spaces with pedestrians (see BCyC Policy on Shared Space Streets and Shared Use Pavements). However the omens are not good in Temple Quay. Our modest proposal shows how proper Space…

A Modest Proposal #4: Clanage Road Roundabout and the Festival Way 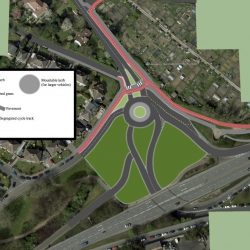 If you want to scare yourself rigid, pop along to Clanage Road roundabout on any weekday in term time at 3.15pm. That’s the time that 1,500 kids pour out of Ashton Park School and onto the fast busy roundabout on the A369. This is a key hub on the F11 Inner Orbital Cycling Freeway in the BCyC strategic cycle network and close to F8 Festival Way Quietway.

BCyC members have been working with local residents on ideas to improve walking and cycling and the junction has been adopted as one of the priorities for the Greater Bedminster Community Partnership (see TrafficChoices tracker).

A paper making the case for change is here: Clanage-Road-Roundabout-Strategic-Route-hub-proposal-May-2015. This has been presented to the local neighbourhood partnership, GBCP, and is based on a series of raised tables, crossings and improvements to reduce the speed of the estimated daily flow of 10-20,000 vehicles. It also aims to significantly increase the number of cycle movements from the current 1200-2000.

Currently there are many problems in the area when walking. It’s loud, unpleasant, with narrow crowded pavement and a 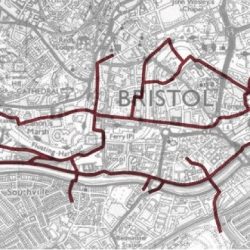 We’ve been given agreement to share with you some plans that we have been helping with for Promenade Routes in Bristol. These are a set of proposals by John Grimshaw to enhance all of Bristol’s waterside quays, towpaths and walkways to create popular promenades to further promote walking and cycling in the area. Bristol’s riversides and docks have long been a popular place to cycle because they are attractive, central and flat. This  project aims to draw them all together to make a real resource for the City, for both pedestrians and cyclists – all promenaders. There are numerous… 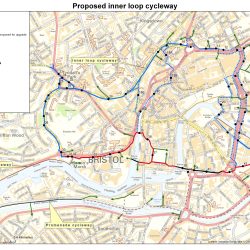